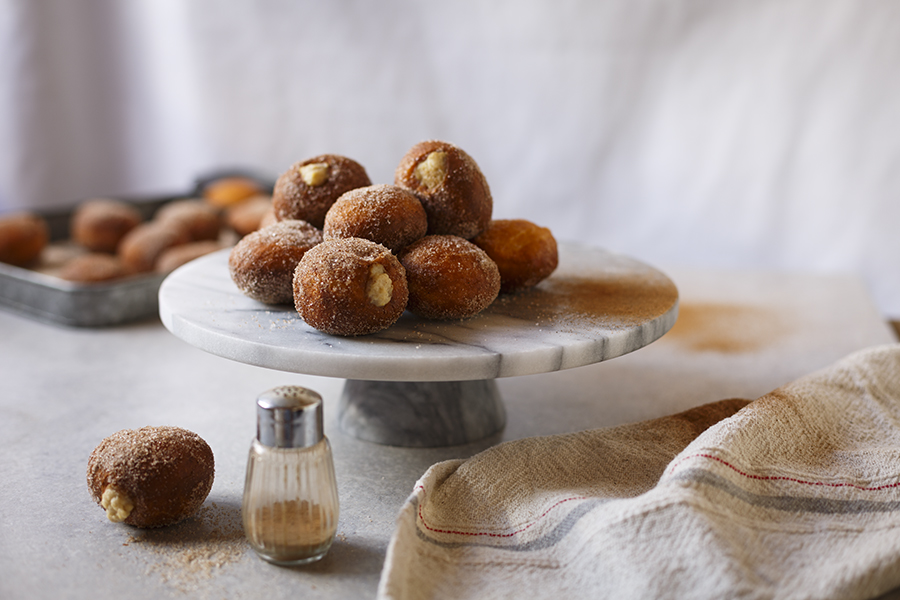 One of life’s best experiences is eating a still-hot doughnut straight from the deep-fryer. Like chilli it has that pleasure-pain thing going on that just drives me crazy! Hot doughnuts are pretty high on my list of ‘things that I crave the most late at night’ as my husband-to-be can attest to, afterall, it was on one of these craving days that I found out he was a keeper! It was about 10pm on a weeknight and I was tucked up in bed. I casually tossed out a ‘I could kill for a warm doughnut right now’ as if uttering the words out loud would somehow make the craving go away. In my doughnut-lusting state I completely missed him sneaking out the room and it was only when I heard the sound of dough being submerged in hot, bubbling oil that I realised my deep-fried carb dreams (and marriage aspirations) were about to come true! A few minutes later, he presented me with 5 perfect, piping hot, light-as-air doughnuts lightly dusted in cinnamon sugar. While I scoffed them under the duvet covers, I remember thinking that these were the best doughnuts of my life. And this was the best man of my life! While I’ve tried to recreate those 5 perfect doughnuts and been unsuccessful, these do come pretty darn close. Stuff them with raspberry jam or nutella if you wish, but since today is National Milk Tart Day, I thought I’d give them a custardy kick. I hope these make your deep-fried carb dreams come true just like they did mine!

500g store-bought or homemade yeast dough, proved once (use my recipe here)

For the filling, bring the milk to a boil (I added a cinnamon stick and bay leaf to mine). In the meantime, whisk together the cornstarch, flour, sugar, egg yolks, vanilla and cinnamon and a little of the milk to make a creamy paste. Pour the hot milk over the paste, whisking continuously then return to the heat and cook until thickened. Whisk the egg whites until stiff then whisk into the still-warm filling. Allow to cool then place into a piping bag. Combine the sugar and cinnamon in a bowl and set aside. To make the doughnuts, knead the dough on a lightly floured surface for 5 minutes or until smooth and elastic. Roll 2 tablespoonful of dough into balls at a time and place on a baking tray lined with non-stick baking paper and set aside for 30 minutes or until risen.

Place the oil and a sugar thermometer in a large, deep saucepan over medium heat until temperature reaches 180°C. Cook the doughnuts, in batches, for 1 minute each side or until golden. Drain on absorbent paper and immediately roll in the cinnamon sugar mixture. Carefully pierce doughnuts with a knife and fill with the custard. Serve immediately.