The Sweet Life Of A Pastry Chef & Opera Cake Recipe 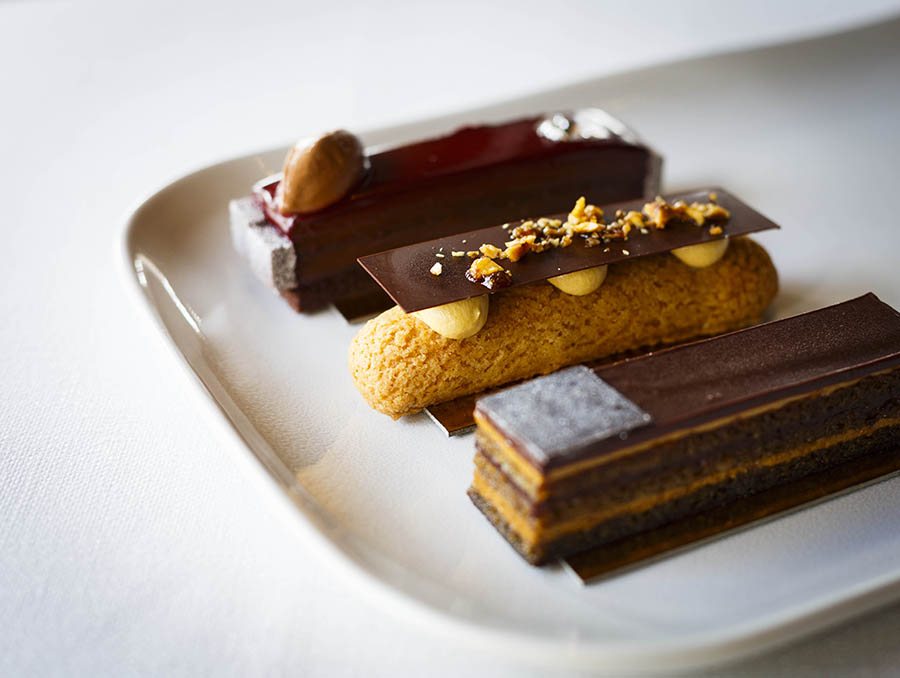 The hero of petit fours, the champion of chocolate, the conqueror of macarons and the instigator of my ever expanding waistline… The Pastry Chef’s job is one we all dream of having! Whipping up decadent desserts all day long? Oh yes, that sounds like the perfect job. But what does it really involve? After my recent trip to Mauritius where I ate 40 desserts in one day (tough life, eh?), I simply had to pick the brain of the mastermind behind all the magnificent bakes. Nicolas Durousseau is not just any pastry chef, he’s the Executive Pastry Chef at the Constance Belle Mare Plage Hotel home to 5 restaurants. Jip, that means 5 different dessert menus, bread and pastries baked daily for the 1000 guests that stay at the resort and a never-ending amount of creativity! 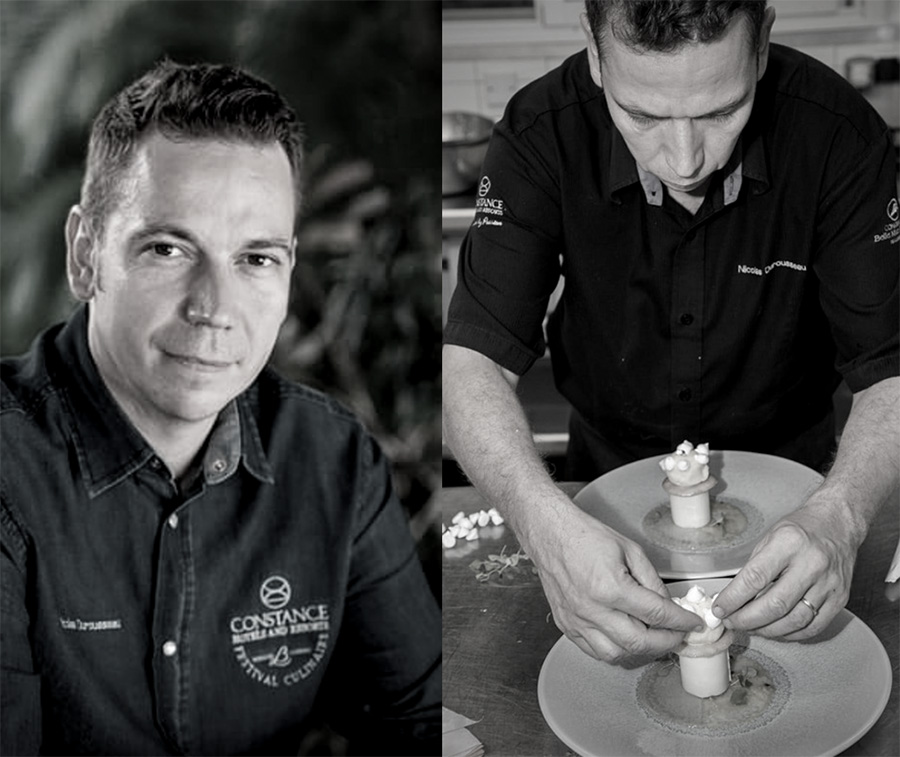 Nicolas’ story began long before he could wield a palette knife; his love of food runs fluidly in his family but began with his grandfather working in famous Parisian pastry shops well into the sixties. He also remembers his grandmother preparing Nice clafoutis with red cherries in the summer along with beautiful egg custard cream with deep-fried beignets – with memories that sweet, no wonder he chose to be a pastry chef! Gordon Ramsay, Marco Pierre White, Pierre Gagnaire, Le Negresco… Nicolas has worked with some of the finest chefs in the world, and while he spends his days tempting the hotel’s guests with decadent creations, I wondered what desserts does he enjoy? So I asked him the question that has always haunted me; If you could only eat one dessert for the rest of your life, what would it be? His answer; a simple Flan Parisien (which to you and I, is a French Custard Tart similar to our milk tart minus the cinnamon). Ah yes, a man after my own heart! 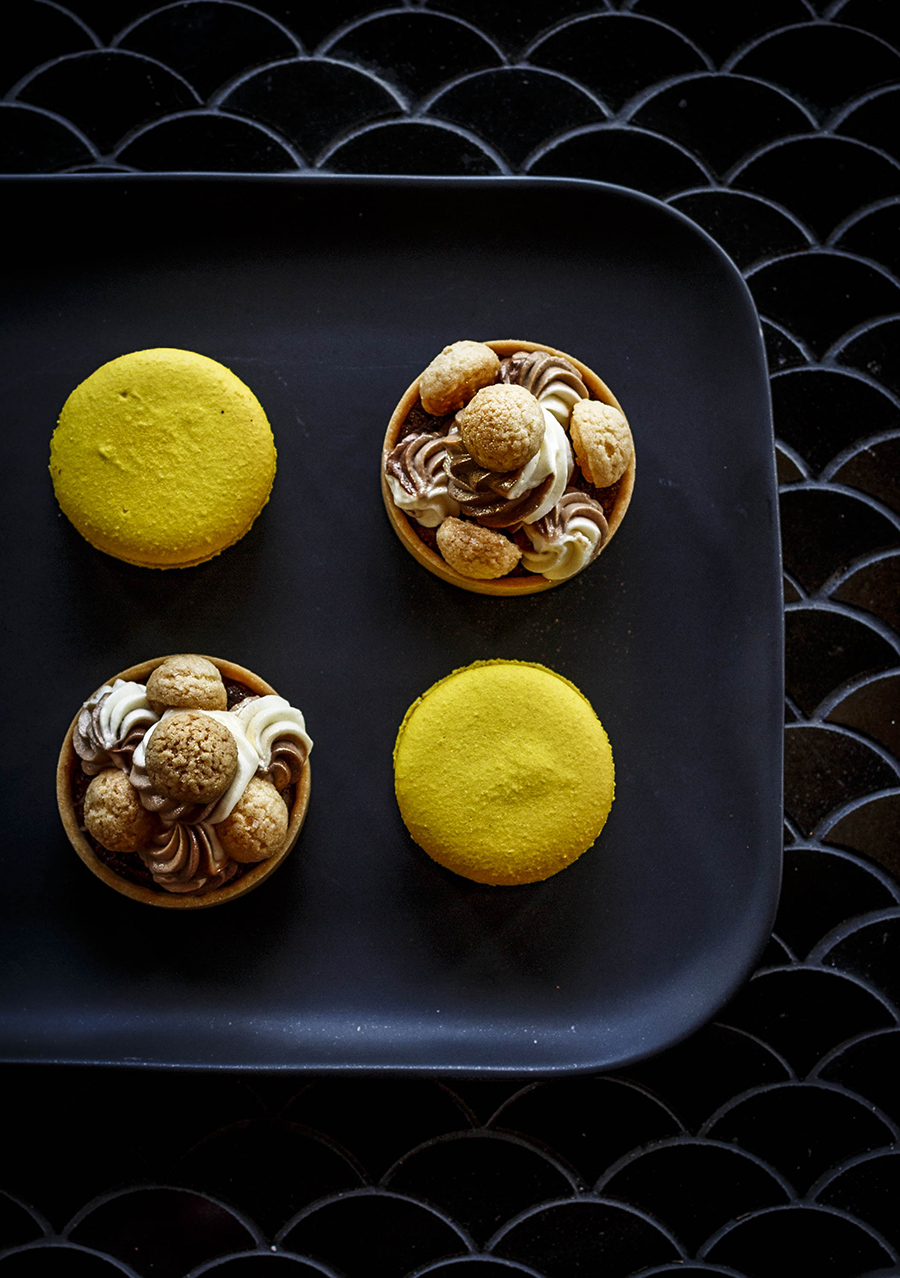 After tasting so many of Nicolas’ wonderful creations, I was struck by his incredible ability to merge flavours effortlessly, but with so many wonderful combinations to choose from, what is his favourite?  “We received a sample from a world-renowned French chocolate maker,  Valhrona, it is a blond chocolate couverture made with muscovado sugar from Mauritius. I simply made an emulsion with the ganache by adding some red chilli, a fresh fruit caramelized compote made of mango, pineapple and banana with a thin layer of yuzu jelly and lime zest. ”  *taste buds explode, brain explodes, tummy grumbles* 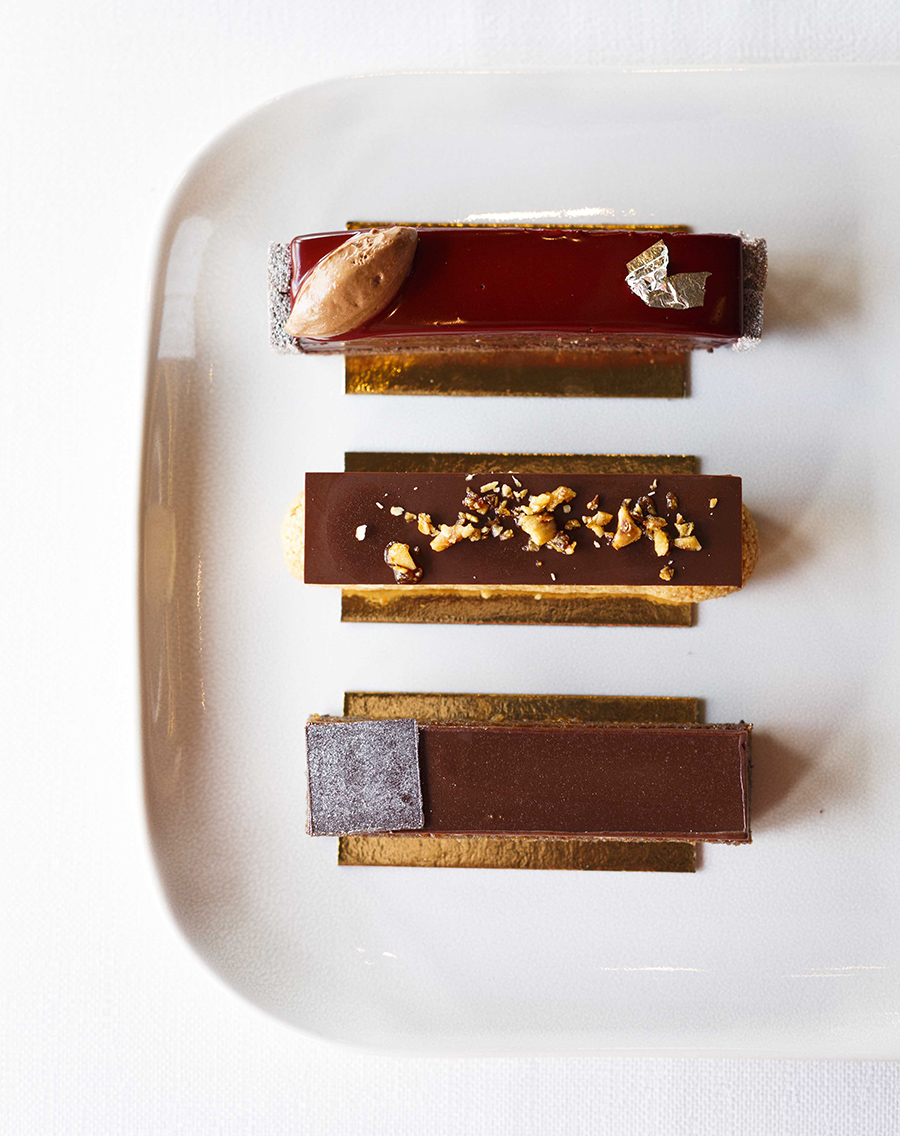 Okay, okay but how can we be like him? How do we channel our inner pastry chef at home? “Perseverance” he says, “Set yourself a goal and then keep practicing until you achieve it”. How about taking his advice and tackling one of Nicolas’ recipes? Like this Opera slice which was my favourite of all his desserts! It consists of layers of sponge, coffee buttercream and chocolate ganache. 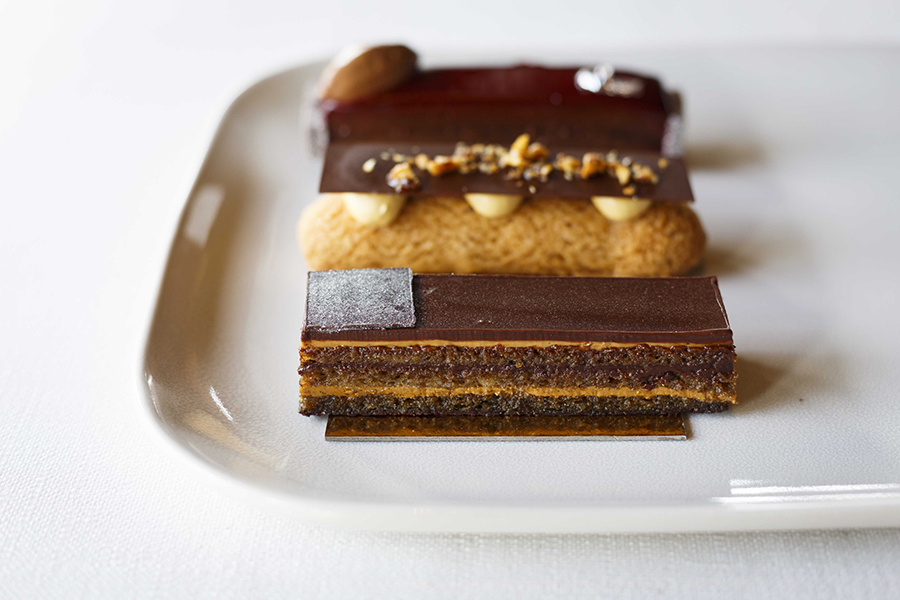 To make the sponge, preheat the oven to 210 degrees Celcius. Melt the butter in a pan and allow to cool. Combine the ground almonds in a separate bowl along with half the sugar and the whole eggs. Mix in the cooled butter. Beat the egg whites until soft peaks then gradually add the sugar and whip until stiff peaks.  Gently fold into the almond mixture in 3 batches. Take a large sheet of baking paper and use a ruler to outline a 30cm by 20cm rectangle then flip the baking paper over. Place the baking paper on a large baking sheet and spray generously with cooking spray. Gently spread the mixture out about 5mm thick on the sheet of baking paper (keeping within the lines of the rectangle) and bake for 10 minutes or until slightly golden in colour. Make the syrup by combining all the ingredients in a small saucepan and bringing it to the boil for 1 minute. Take off the heat and cool. Set aside. For the buttercream, make the syrup by bringing the sugar and water to a boil in a small saucepan over a medium-heat until the syrup reaches 118 degrees Celcius on a thermometer. In the bowl of a stand mixer, beat the egg whites together on a low speed until soft peaks form. Increase the speed to high and pour the hot syrup in a steady stream. Sprinkle in the coffee powder along with the vanilla seeds and drop the butter in, cube-by-cube, until all of it has been fully incorporated. To make the chocolate ganache, roughly chop the chocolate into medium-sized pieces. Bring the milk and cream to a boil and pour over the chocolate, allow to sit for 2 minutes then stir to combine. Mix the butter in and allow to cool.

To assemble: Slice the sponge into three equal parts, these will make up the layers of the opera. Dab the coffee syrup gently onto the sponge slices using a pastry brush. Evenly spread half of the coffee butter cream on top the first layer of sponge then add the second layer and spread half the ganache over. Add the final layer of sponge and spread the rest of the buttercream evenly then spread the rest of the ganache over the buttercream. Allow to set before trimming the edges neatly. Once set, slice the opera into 10cm by 3cm rectangles. 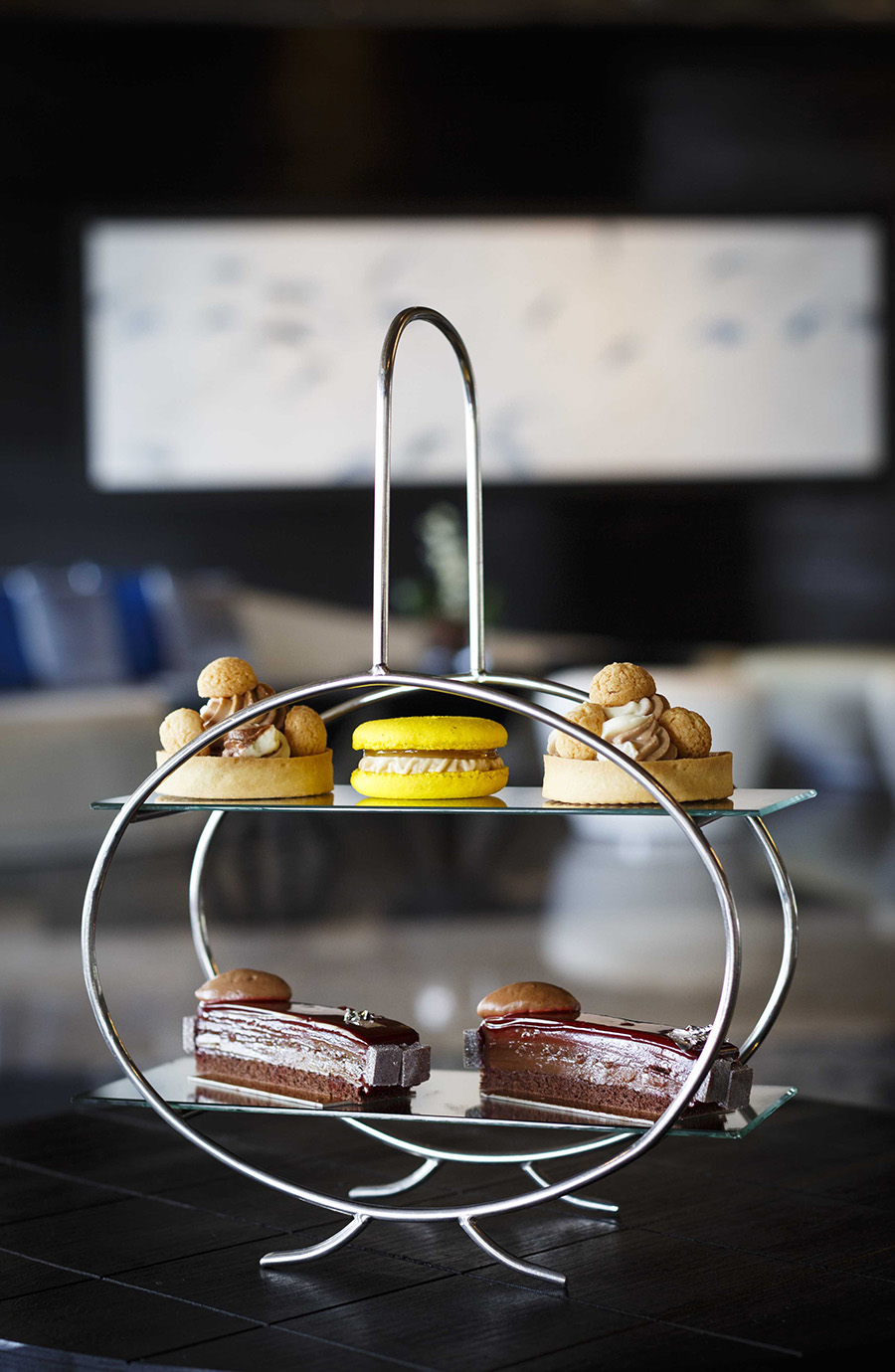