If you’re in any way as obsessed with baking and desserts as I am, you will have already heard about all the fuss that’s being made over a trendy new confection that’s tipped to kick the cupcake off it’s pretty little throne (although, let’s be honest, the same thing was said about macarons, cake pops and whoopie pies and yet we still adore the good ol’ cupcake). Dubbed the ‘cronut’ (it’s already trademarked by the way) this hybrid dessert sensation has caused quite a stir. Half-croissant and half-doughnut, it sure does have a bit of an identity crisis but the New Yorkers queuing around the block at Dominique Ansel Bakery don’t seem to care as these deep-fried delicacies sell-out in minutes each day. There is even a limit as to how many you can buy! French pastry chef, Dominique apparently had to try 10 different recipes before getting the creation spot-on and his perseverance is clearly paying off. But since I draw the line at flying half way round the world to taste a dessert, I attempted to create my own cronuts. You know, so I could see what all the fuss was about. 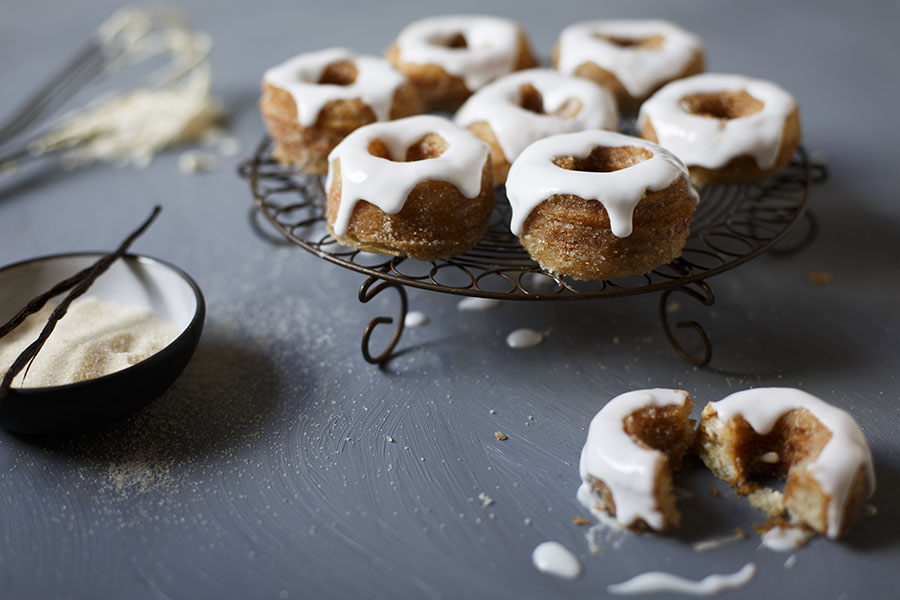 If you’ve made croissants from scratch before, you’ll know that it takes an incredible amount of love, patience and muscle. And butter. Lots and lots of butter. But the problem with all that butter (incase you didn’t know, half the weight of a croissant is made up of it – eeeek!) is that if you were to deep-fry the dough just like that, as Dominique’s recipe (and name) suggests, it’s low melting point means it would just seep out into your oil when frying and you’d land up with a flat mess. So, I used margarine. First problem solved. 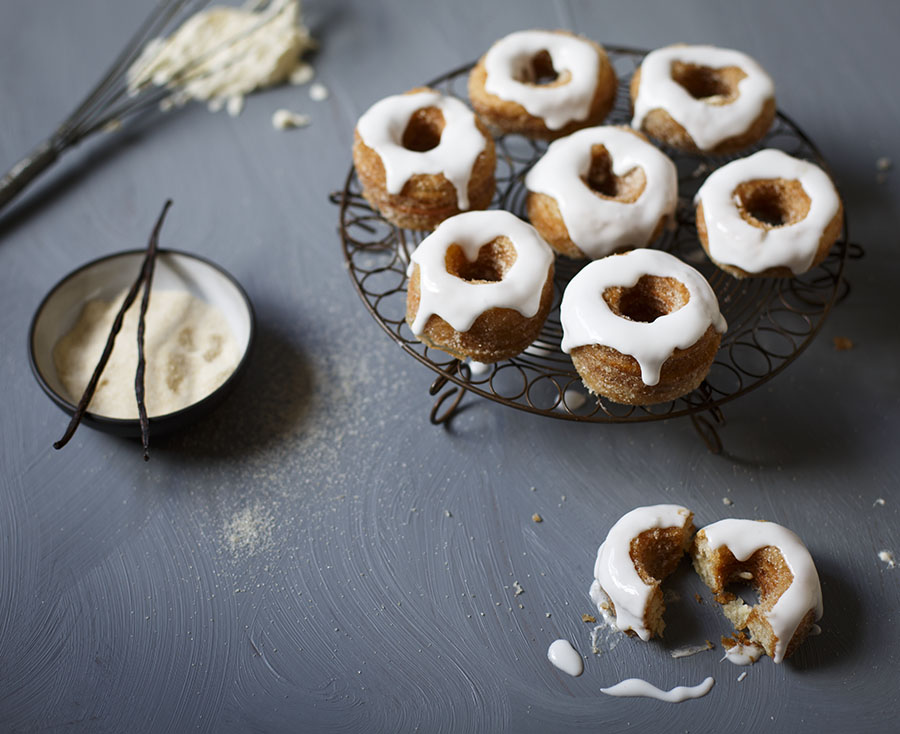 The second problem was the fact that, although the cronuts claim to be made from croissant dough, the texture in all the pictures resembles that of danish dough instead. Croissant dough, as I experienced, contains way too much fat, which makes it incredibly oily, as I discovered. So, that meant reducing the amount of fat in the dough.

There were a few more problems I encountered but I won’t go in to detail as by now I’m pretty sure you just want to see the recipe don’t you? Well, here it is, the recipe for Kronuts (my version of Cronuts).

P.S. My verdict? Personally, I think these things are not for the faint-hearted. Essentially it’s fat deep-fried in more fat and after just one my arteries were screaming. I baked a few rather than frying them (yes, I know that doesn’t really make them a ‘doughnut’) and they were delicious (and far more healthy!).

Start by making the roll-in. Mix the margarine and flours well then spread out onto a sheet of cling wrap. Spread out roughly then top with another sheet of cling wrap. Using a rolling pin, roll the fat out until 1/2cm thick to make 30 x 20cm rectangle. Close the ends of the cling wrap and place in the freezer until hard. In the meantime, prepare the dough by mixing the yeast and water in a mixing bowl. Cover and place in a warm place until frothy. Then add the rest of the ingredients in the bowl of a mixer using the dough hook attachment. Add the flour gradually to form a stiff dough (depending on the gluten content of your flour, you may use more or less, so adding it gradually is important.) Knead for about 4 minutes then allow the dough to rest for 20 minutes. Roll the dough out on a floured surface to 1cm thick then place the chilled butter roll-in on top. Do a simple 3-fold (like folding a business letter) and roll out again to 1cm thick. Cover and place in the freezer to rest for 20 minutes. Roll the dough out once again to 1cm thick then do another 3-fold. Rest again in the freezer for 20 minutes before doing the last fold and rest. Roll the dough out again to 1cm thick and cut out with a round cookie cutter and a smaller one, to create the hole in the centre. Place the pastry circles onto a lined and floured baking sheet, cover lightly and allow to proof in a warm place until doubled in size. Preheat the oil to 165C and deep-fry the cronuts in batches until golden and puffed. Drain on paper towel and allow to cool completely. If you would like to dredge them in sugar, do so while hot. If, like me, you would like to bake them, bake in a preheated oven at 200C for 10-15 minutes or until golden and puffed. To make the pastry cream, heat the milk and vanilla until just below boiling point. Cream yolks, sugar and flour then gradually pour in the hot milk while whisking. Return the mixture to the pot and cook, while stirring until thick. Place in a bowl, cover the surface with clingwrap and allow to cool completely before folding in the whipped cream. Place the cream in a piping bag with a small plain nozzle. To make the glaze, whisk the egg white slightly then add enough icing sugar to form a stiff paste. Add the lemon juice and orange blossom water. To assemble, poke 3 holes in the bottom of each cronut with a chopstick or knife then pipe pastry cream into the bottom of each. Dip the tops in the glaze and allow to set. Serve immediately.