From cannoli and cassata to almond granita and pistachio gelato, I ate my way through Palermo, Bronte and Modica on a dessert road trip across the island of Sicily.

I can’t quite point out the moment I fell in love with Sicily. Perhaps it was the first time I ordered gelato for breakfast – and no one batted an eye. Or maybe it was when I went back for my third iris fritta – in a row – and nobody cared. In Sicily, dessert is a way of life, calories don’t count and a sweet tooth like mine feels right at home. 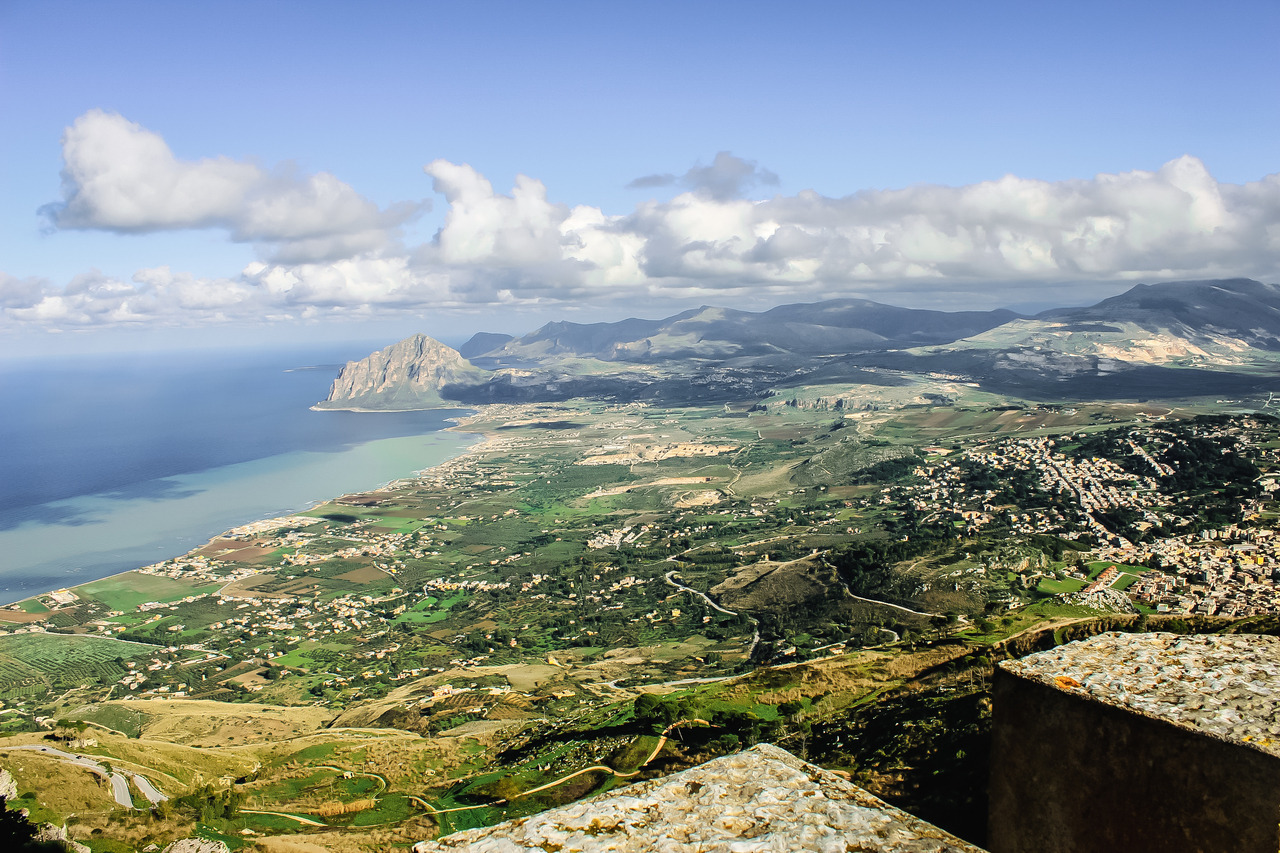 With its rugged mountains that tumble into a blue sea, Sicily looks like home too. Its warm Mediterranean ocean has over centuries brought with it wave after wave of conquerors. Each new conquering nation – and there have been many – left traces of their cuisine, language and culture which vary quite drastically as you travel from town to town. 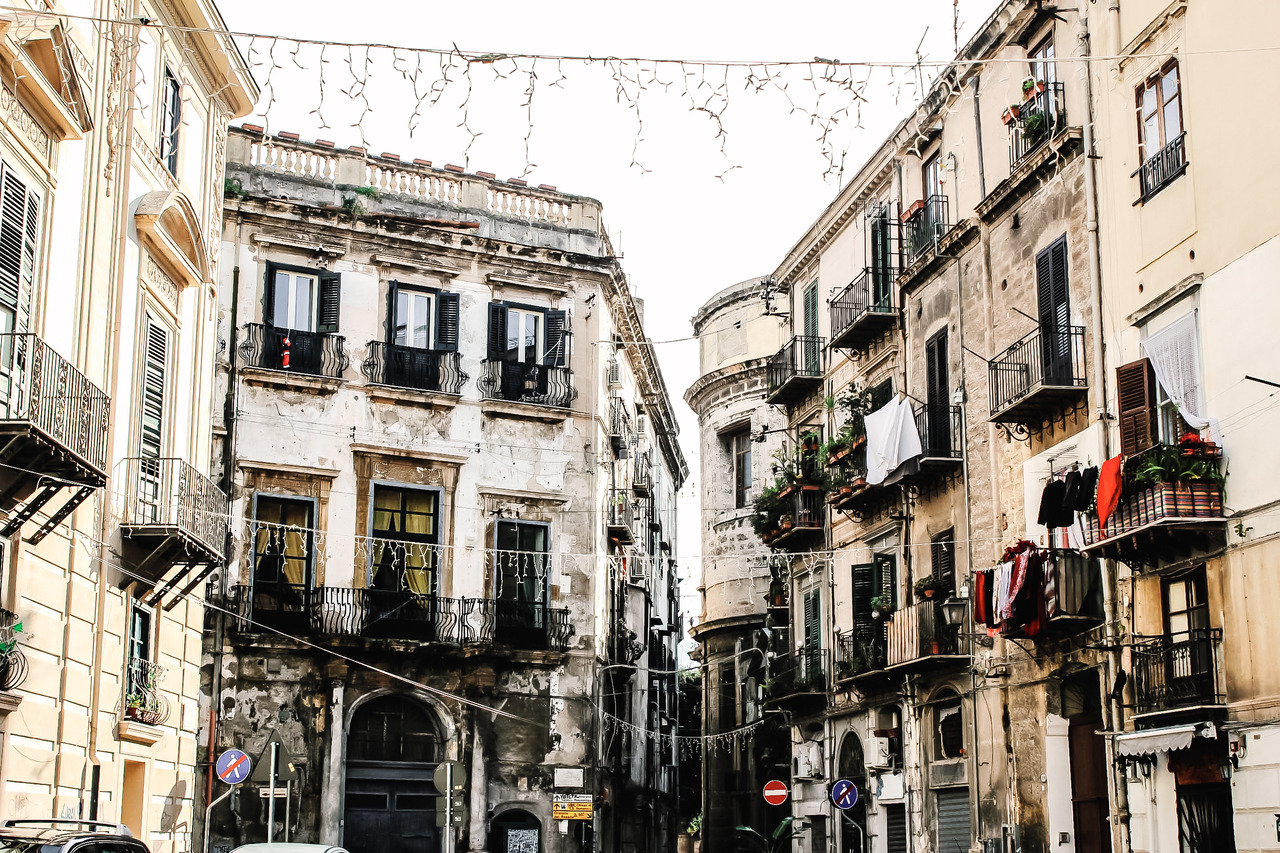 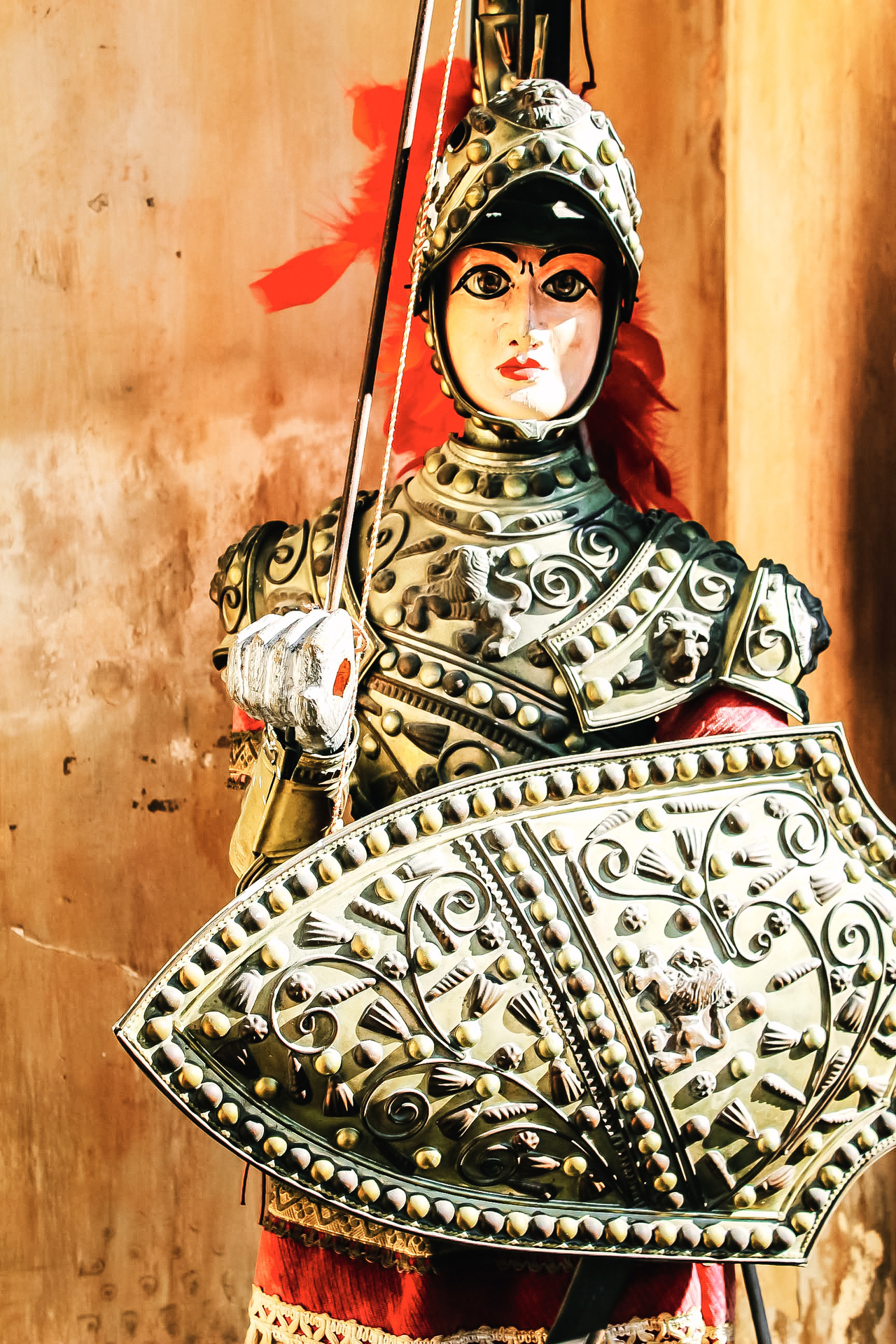 I watched the rocky seaside gradually turn into intricate Arabic architecture through the window of my rental car as I drove from Palermo airport into the capital city.  Sicily is the perfect road trip destination – it takes just 4 hours to drive from one side to the other side of the island. While most people head straight for Palermo’s markets and street food, this was not that kind of road trip – and I had a cannoli craving to satisfy! 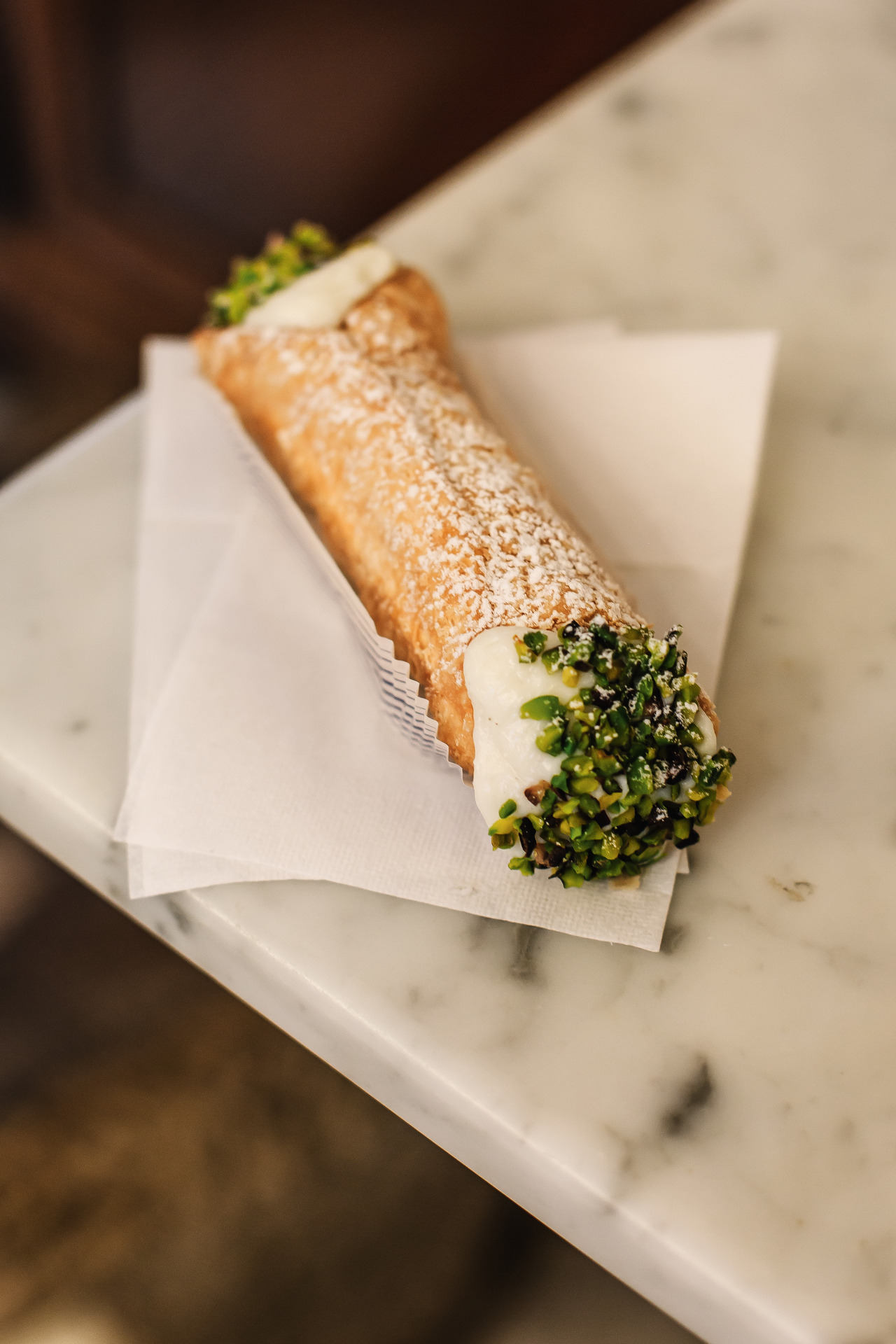 Cannoli are found all over Sicily, but I think the ones from Palermo are the best. The crispy blistered shell is thanks to the addition of the nearby Marsala wine and has a bitterness which perfectly counteracts the smooth, sweetened ricotta filling made from sheep’s milk.

(Side note: if you want to make your own, I’ve got a killer recipe here) 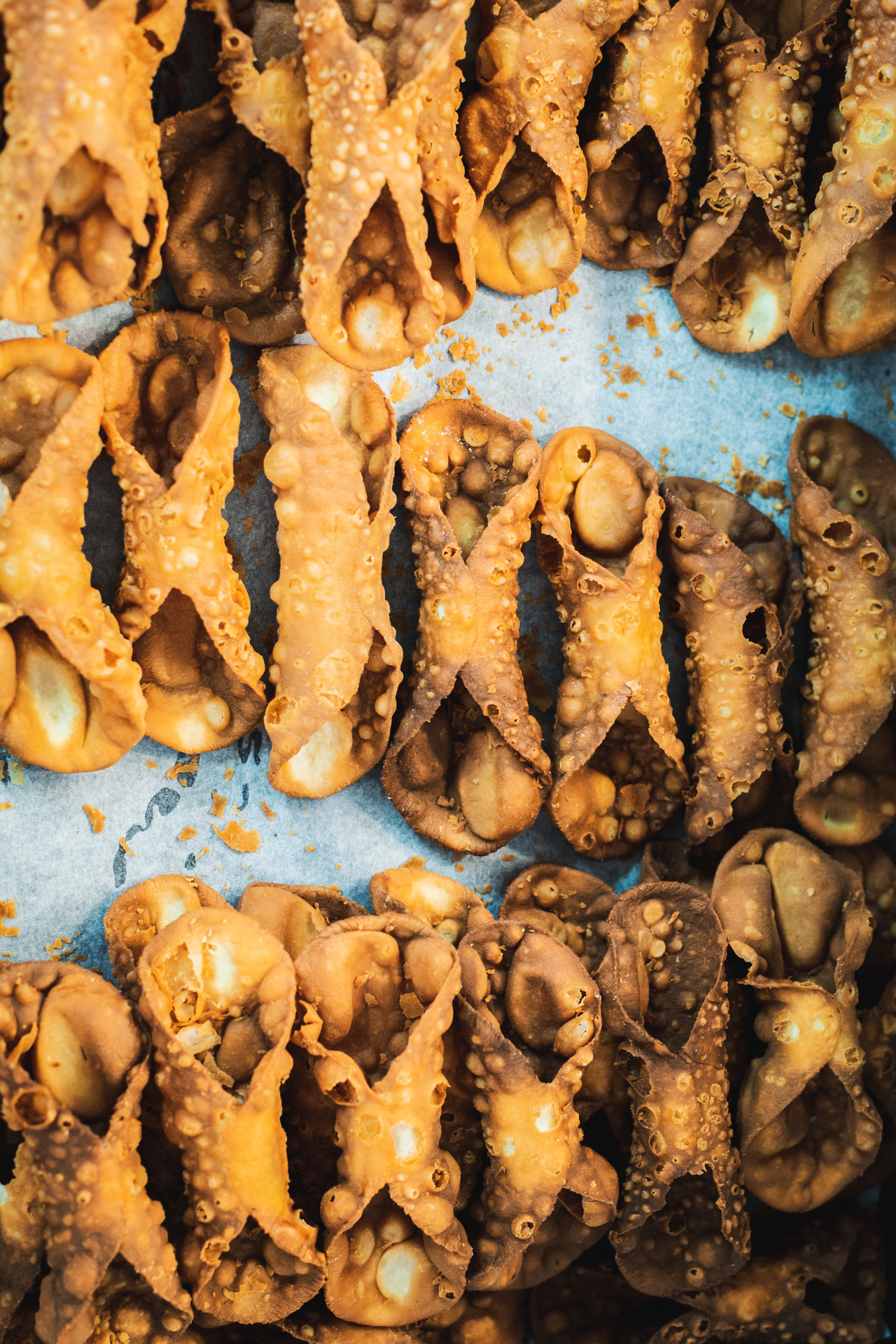 There’s a pretty easy way to know which ones are worth the calories: a really great cannolo is always filled to order so the shell stays crisp and crunchy. You’ll also find modern riffs on the classic with interesting flavour variations but my favourite, from Gelato & Cioccolato, is stuffed with scoops of ricotta and pistachio gelato. 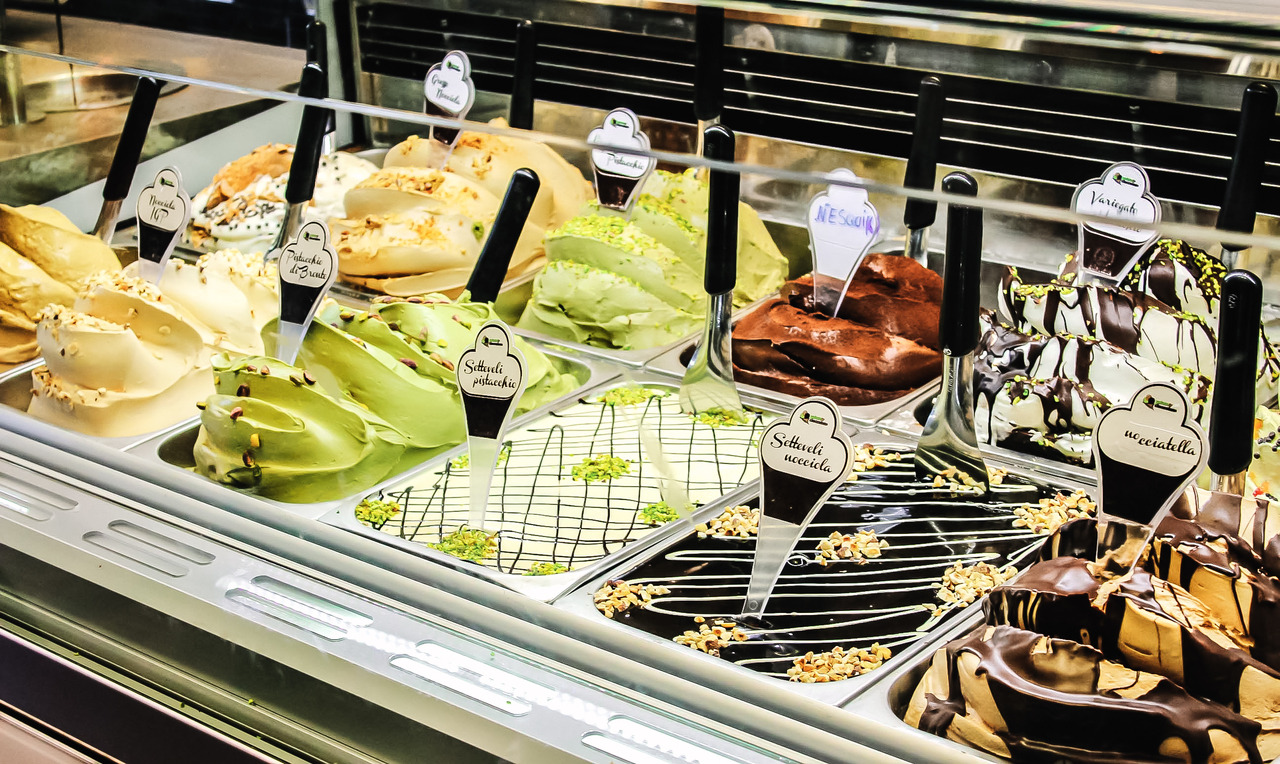 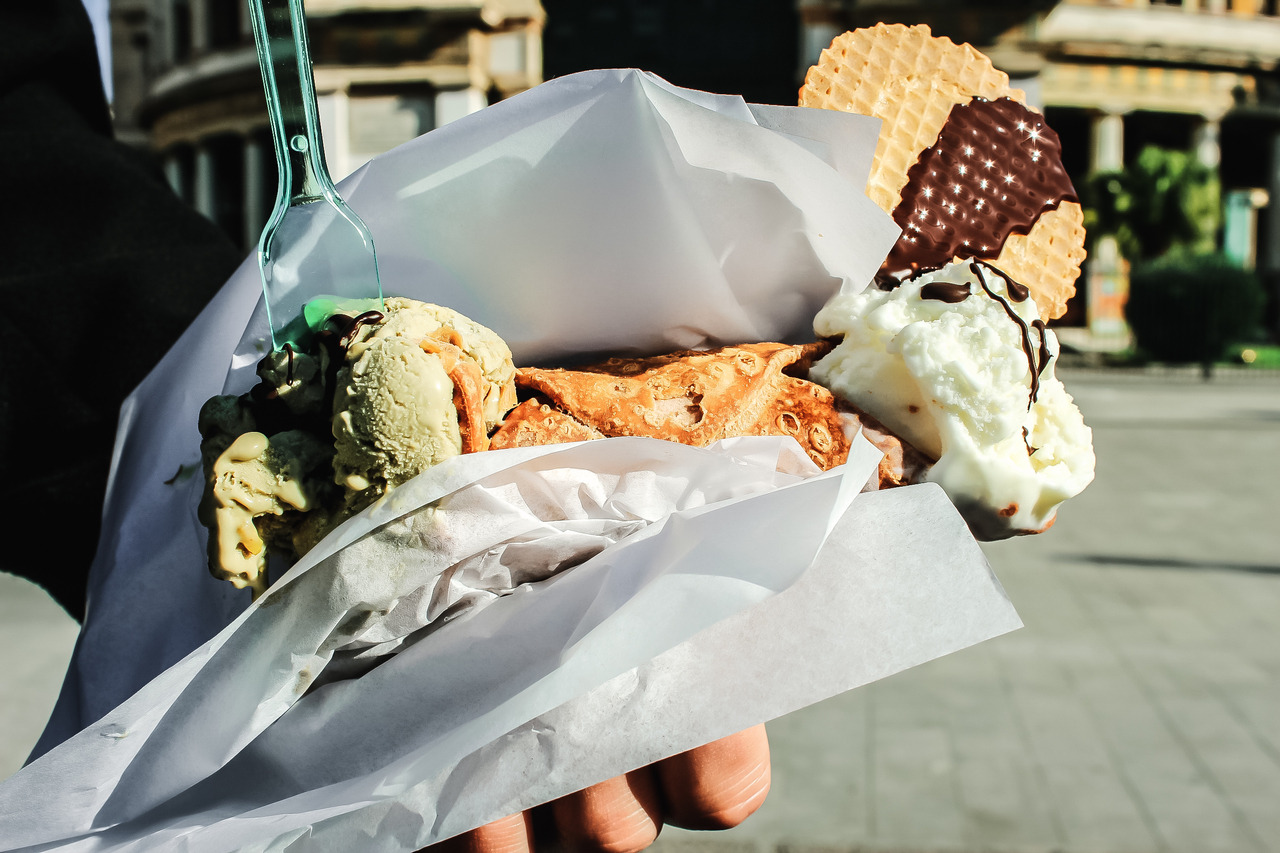 Next on my list was what has been described by Sicily’s most famous pastry chef Corrado Assenza as ‘the most elegant expression of Sicilian culture’, the cassata.  Layer by layer, the cassata symbolizes over a thousand years of Sicilian history. The sugar cane, the almond, the lemons and oranges were brought here by 9th-century Arab invaders. The pan di spagna (sponge cake) is from the Spanish, the white fondente icing from the French. The marzipan is dyed green in homage to the days when bakers could afford to use pistachio paste, from those famous nut trees that flourish in the nearby village of Bronte. 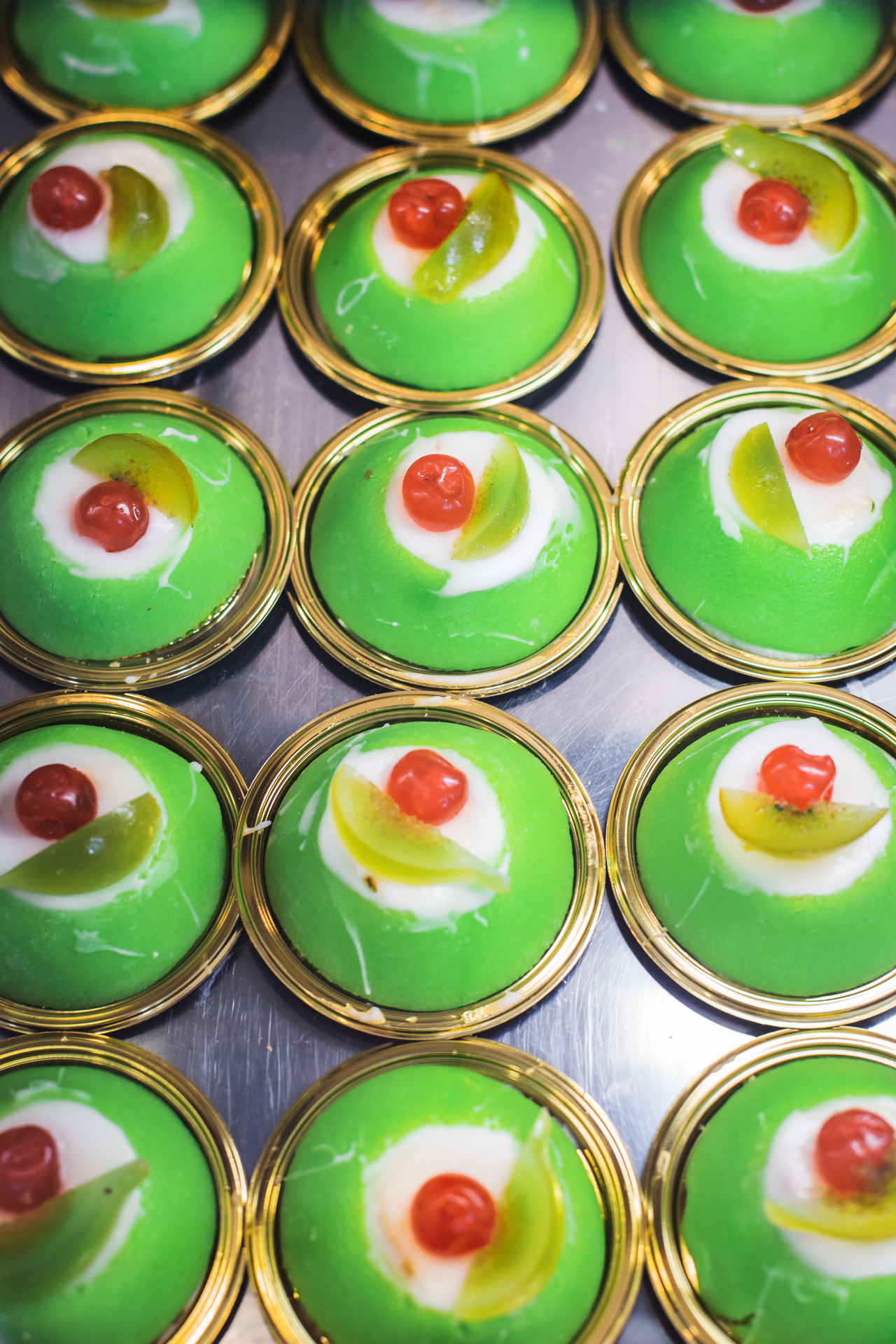 I choose a cassatine (the miniature version) from the pastry counter of Pasticceria Capello. I find a bench overlooking the Piazza Ruggiero Settimo and tuck into my pretty little cake with a plastic fork. As cathedral bells clang, I marvel at the ornate Arabic influence of Palermo’s skyline and how that design is echoed in the beautiful piping on the dessert I’m devouring. Licking my fork clean, I’m already thinking about my next treat. 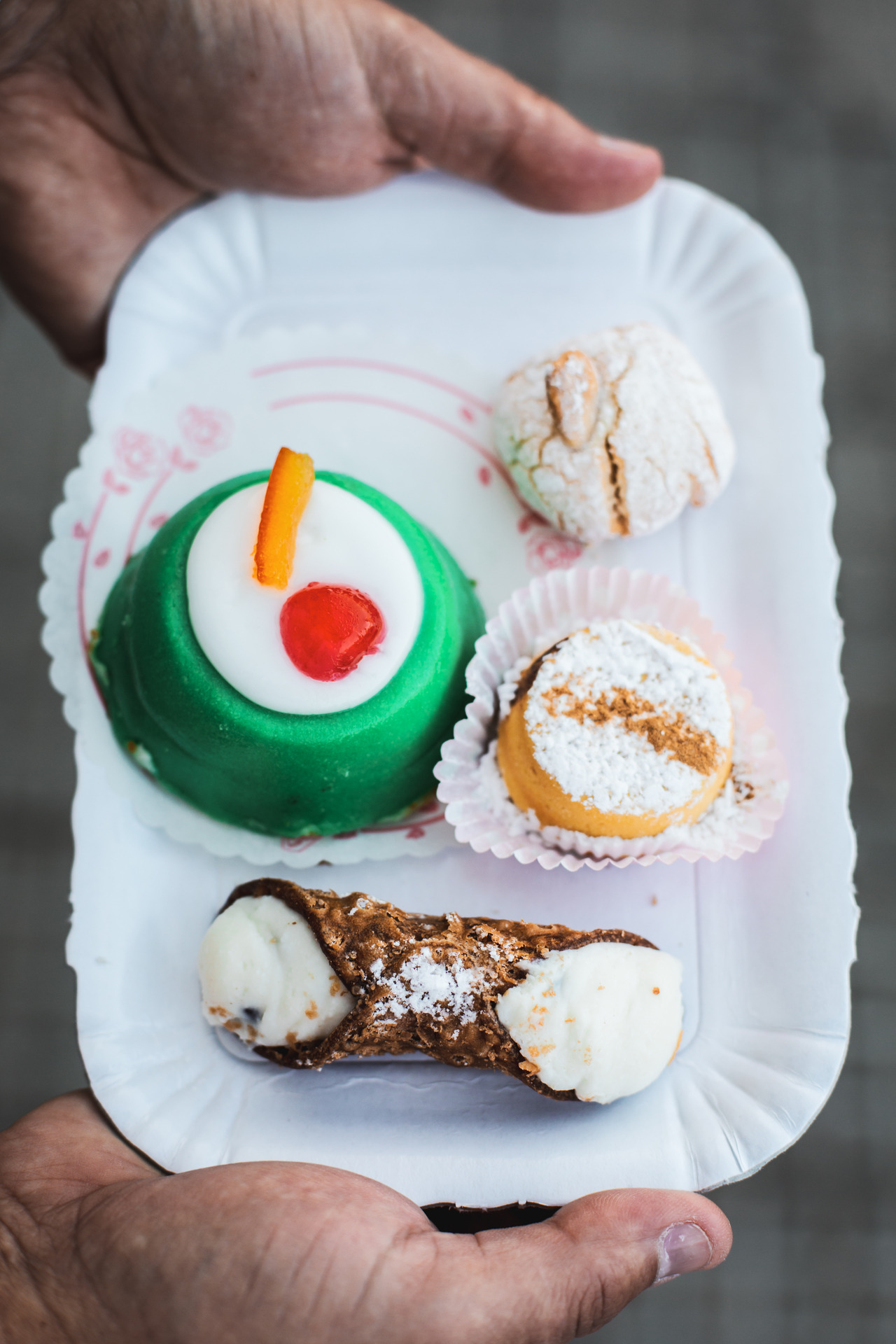 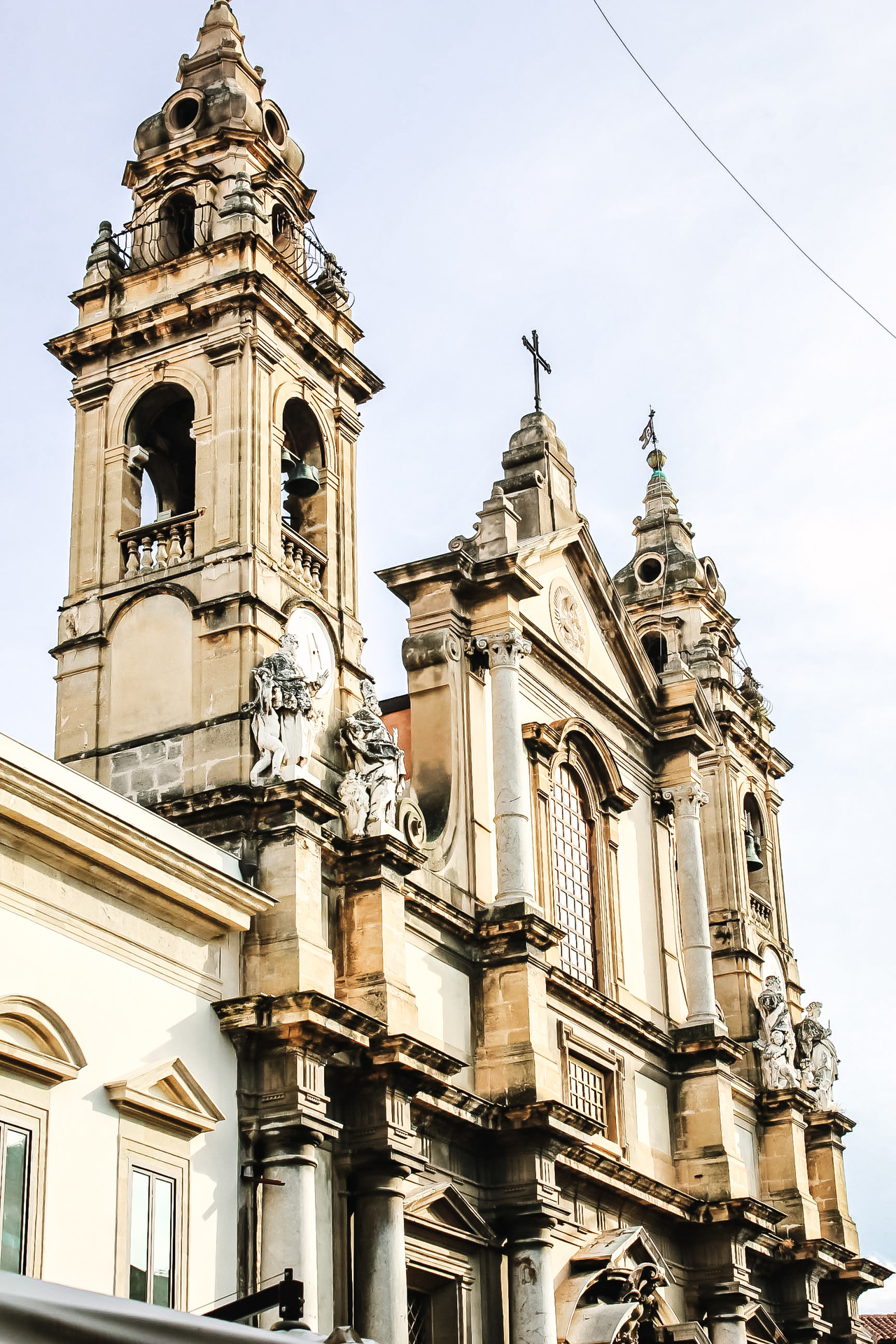 I leave Palermo in my rearview mirror and head to Alta Villa Millacia. September is the month of Madonna in Sicily and throughout the month you’ll find small towns celebrating the saint with spectacular processions, street food, nut roasting, sweet making and festivities. 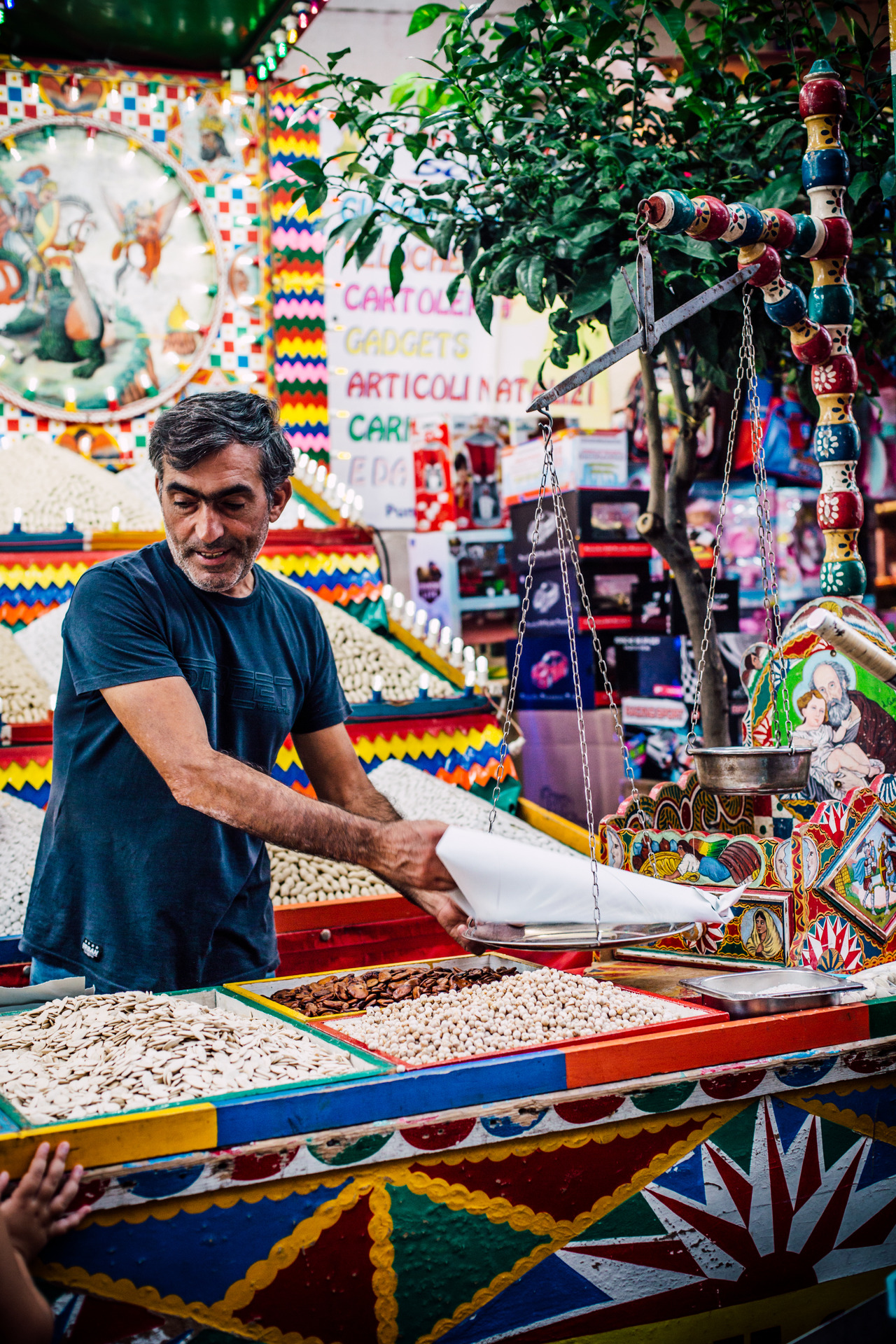 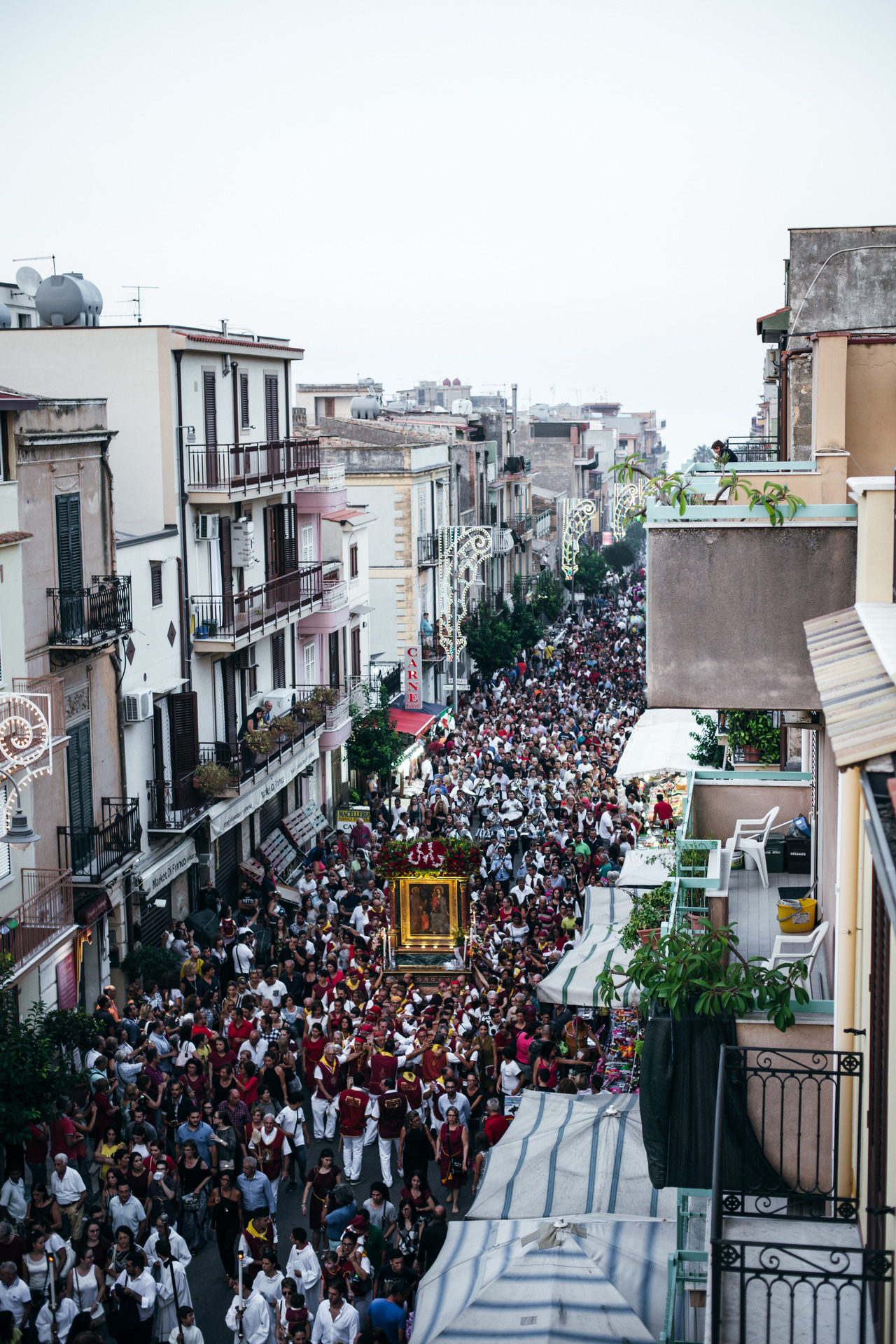 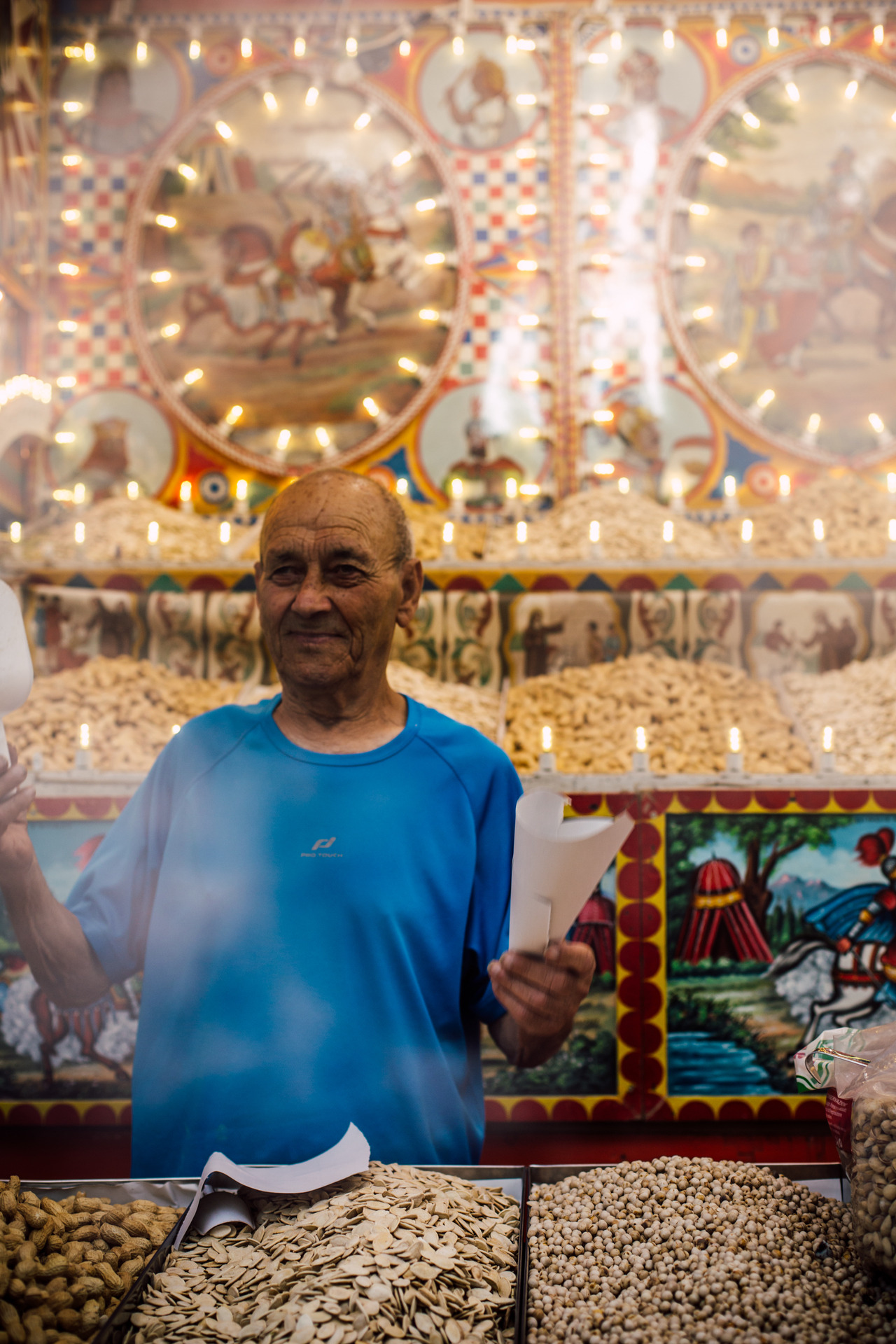 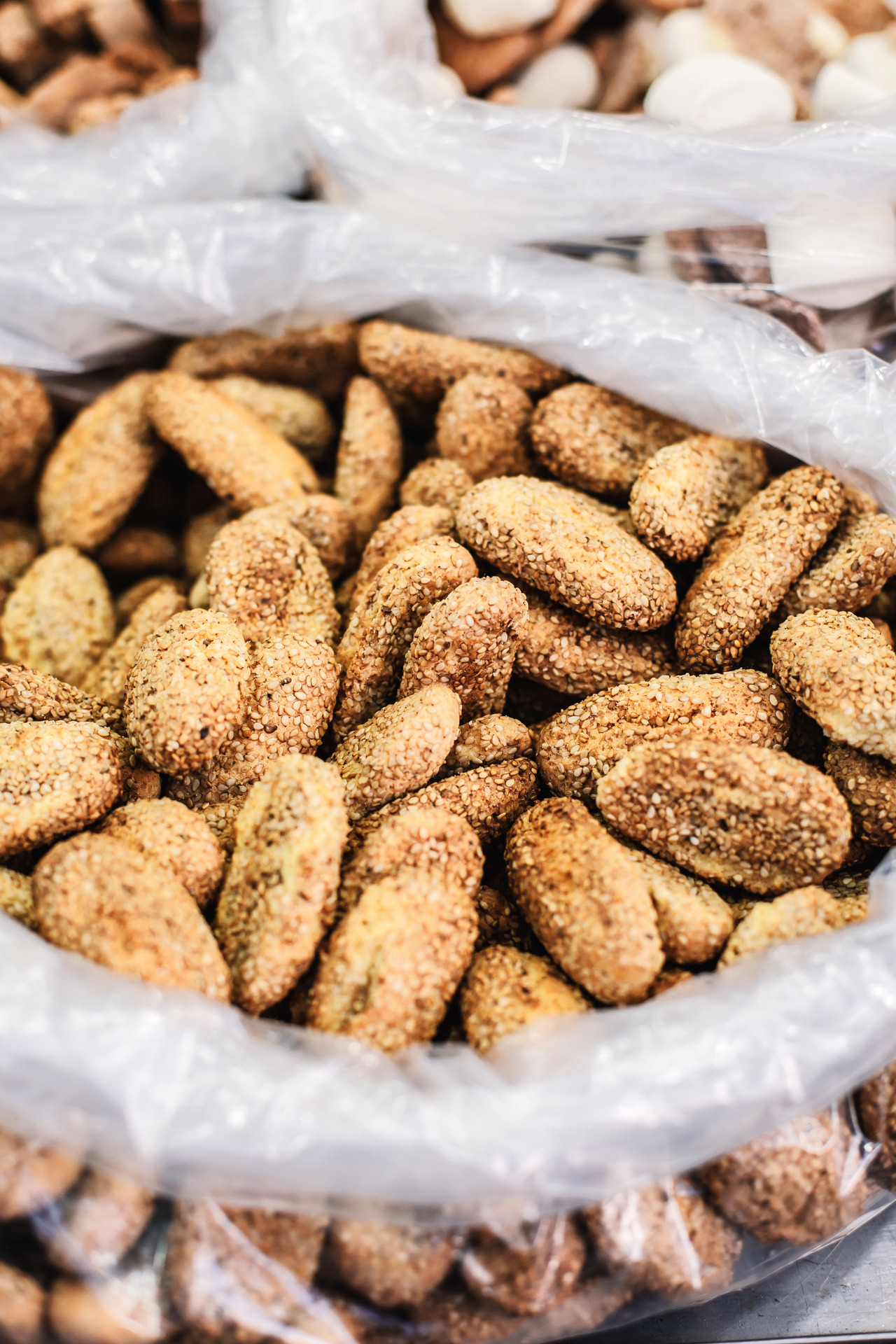 The scent of vanilla and caramel on the hot summer air lured me from my itinerary to explore the festivities. The closed street was lined with pastry chefs armed with giant swords and marble slabs – each lifting and moulding the hot sugar and almond mixture into perfect bricks of torrone. 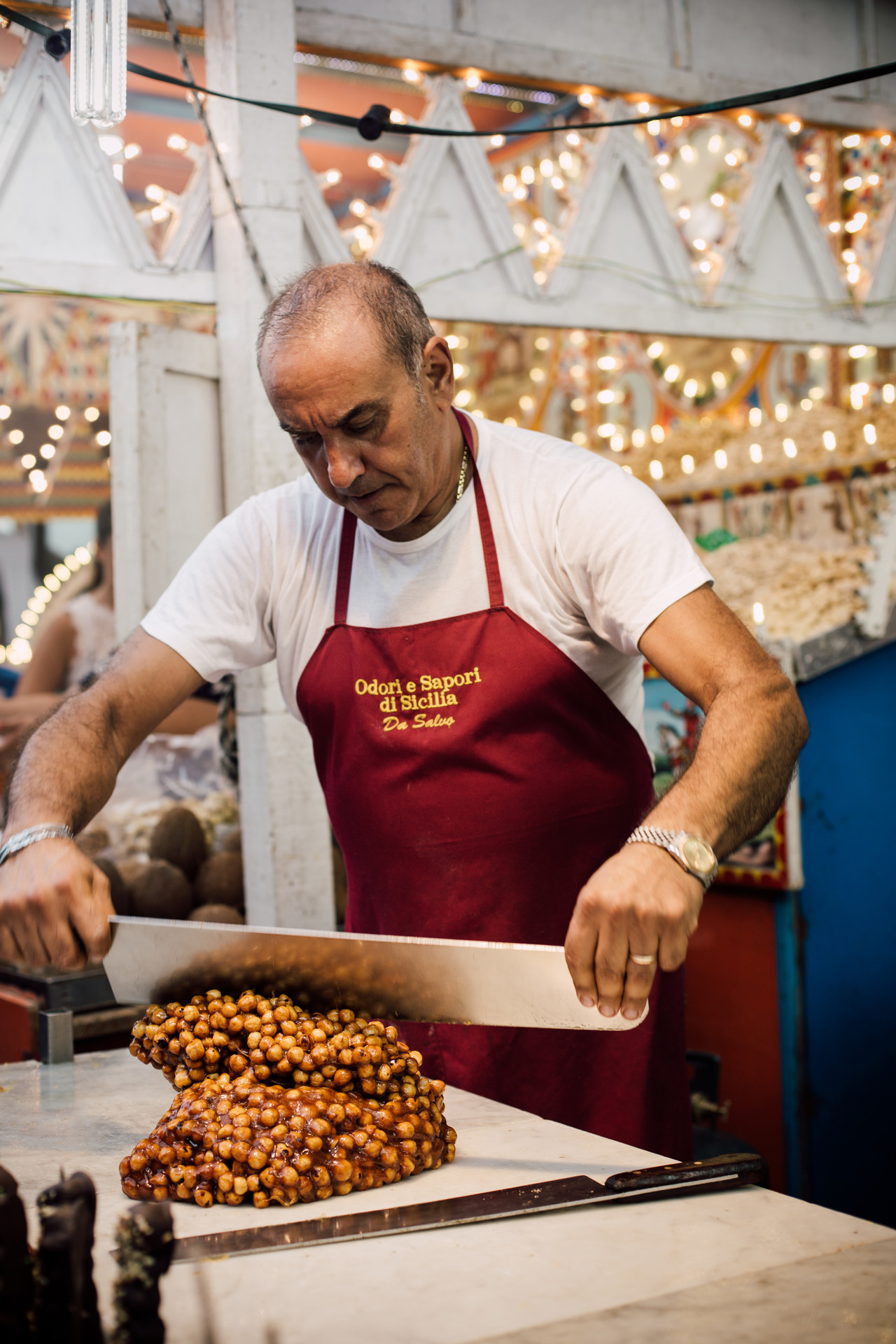 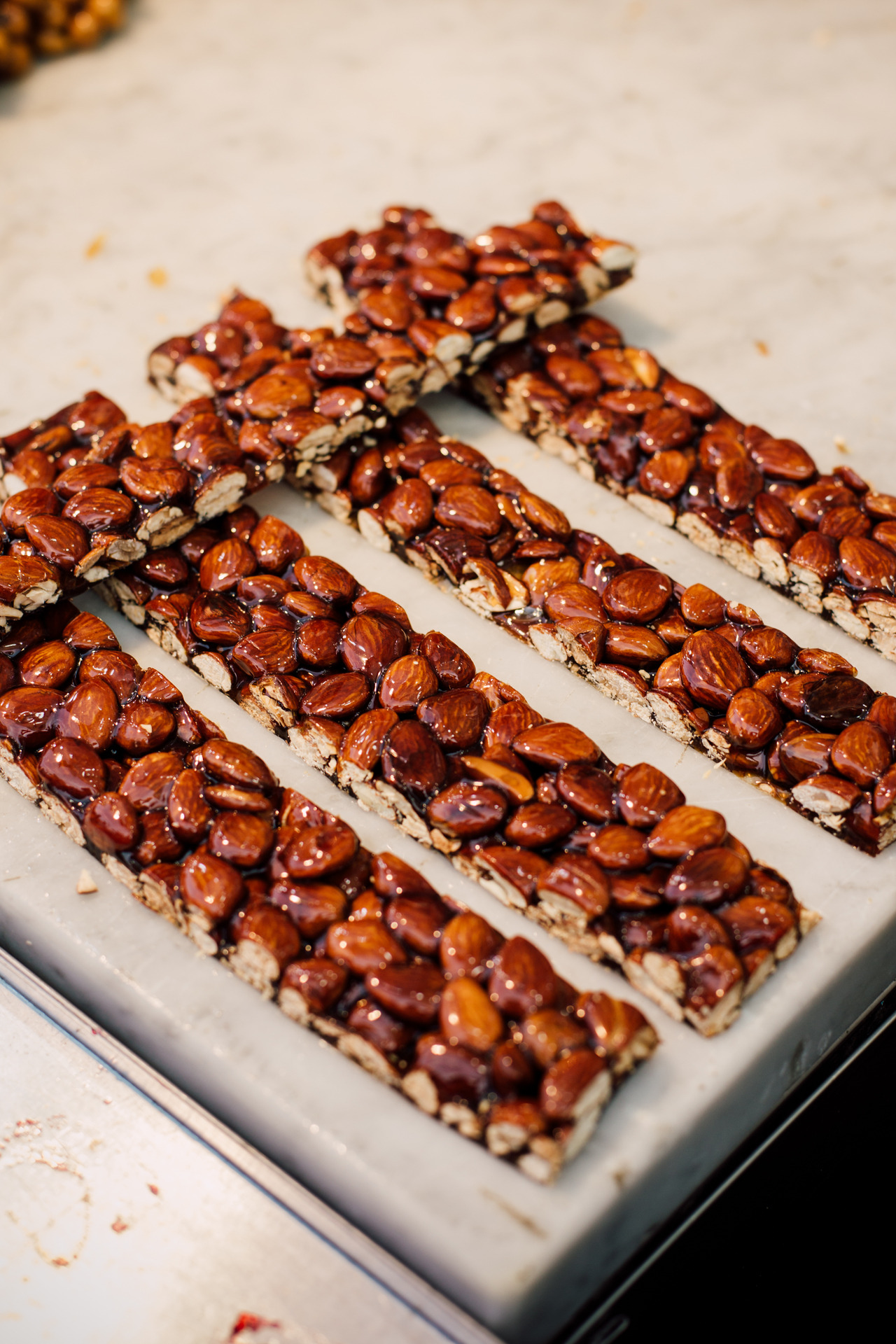 I wound my way along the shimmering Sicilian coastline with the rocks tumbling into the sea and the thick heat miraging on the horizon. It was gelato time. A short 20-minute drive from Alta Villa Millacia along a marina with docked fishing boats is Gelateria Cicciuzzu. 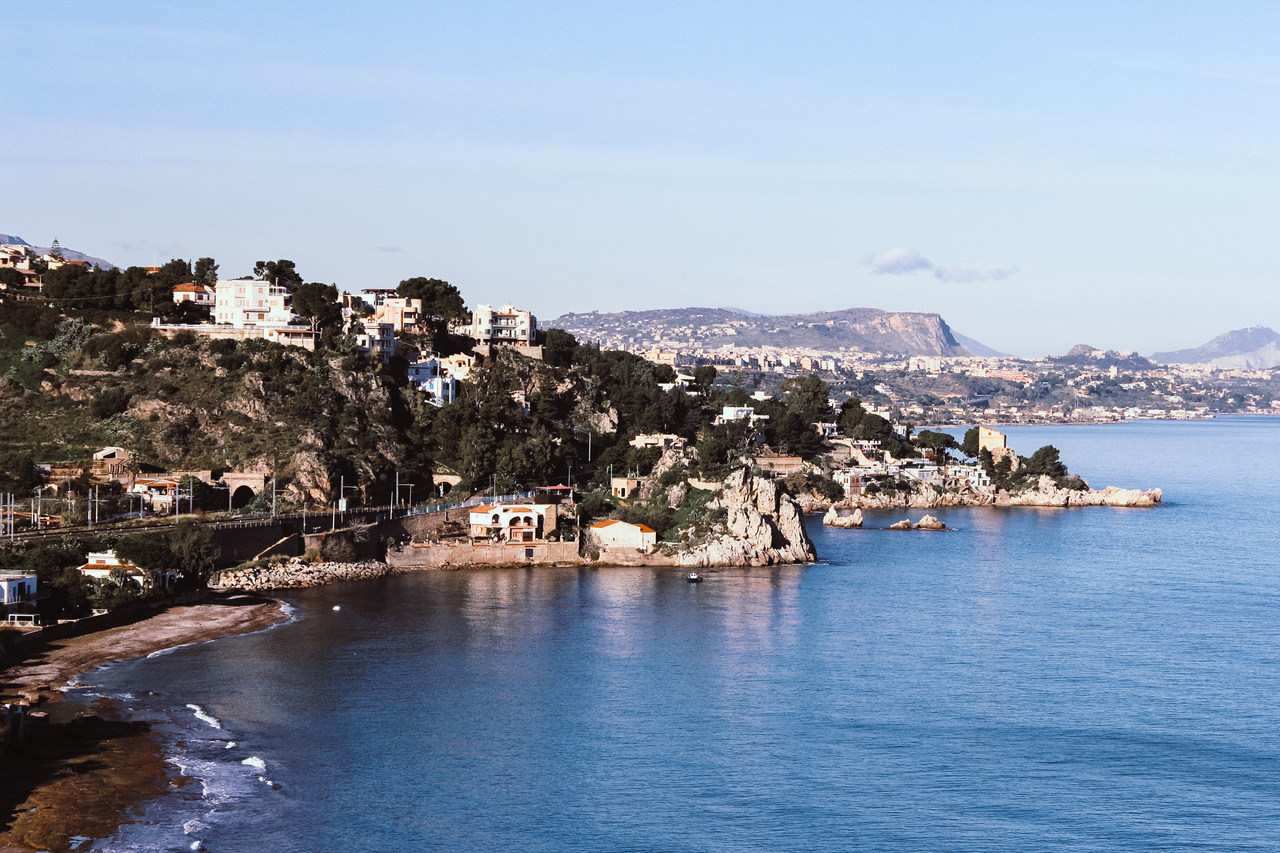 The legend of Francesco Amoroso is a famous one and I read the story of the gelateria owner from a newspaper clipping pinned to the wall while licking my chocolate cherry gelato. In 1955 he set up a small boat and sailed along the coast of Termini Imerese selling ice cream to those swimming in the warm sea.  I wish I could’ve been one of those bathers! 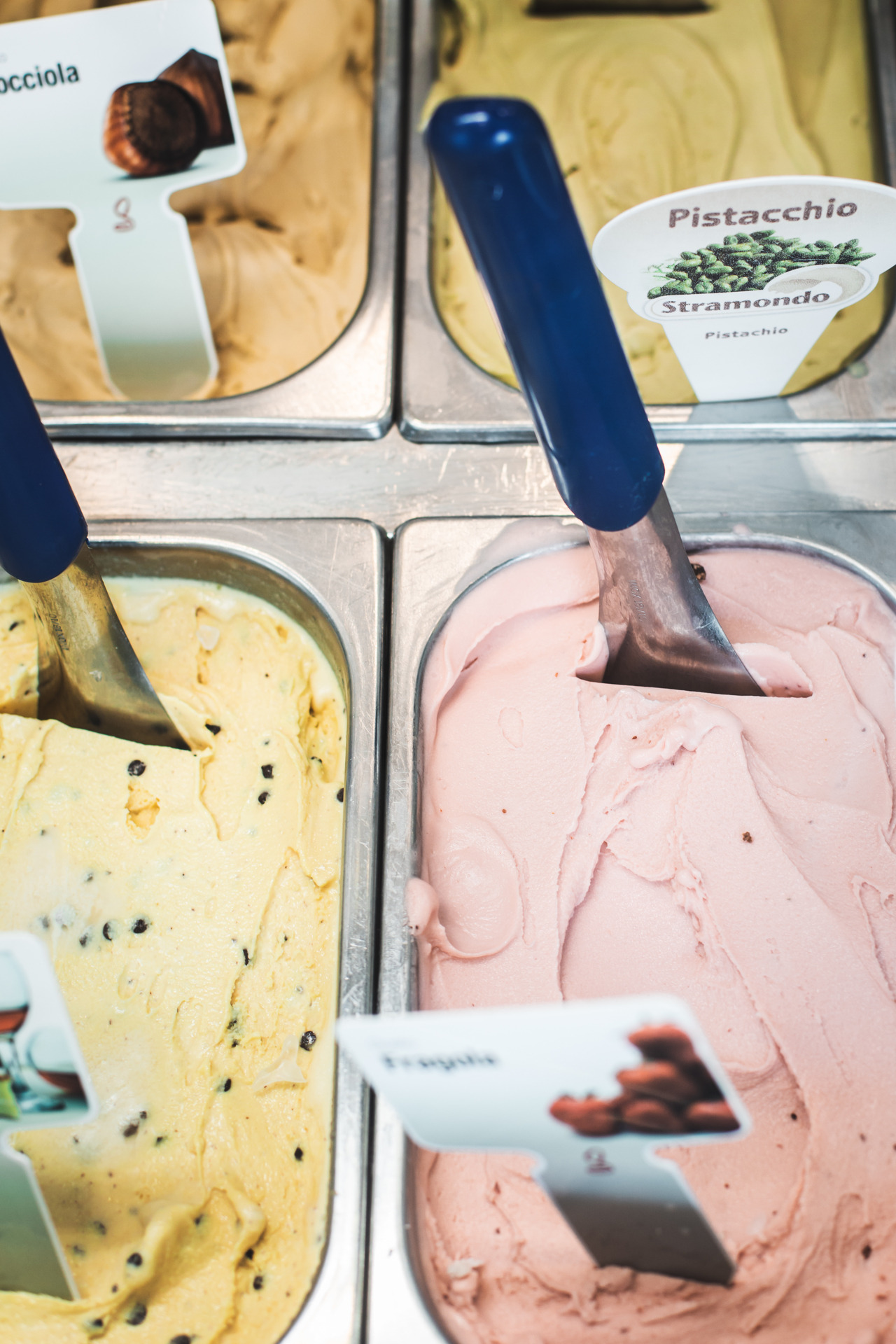 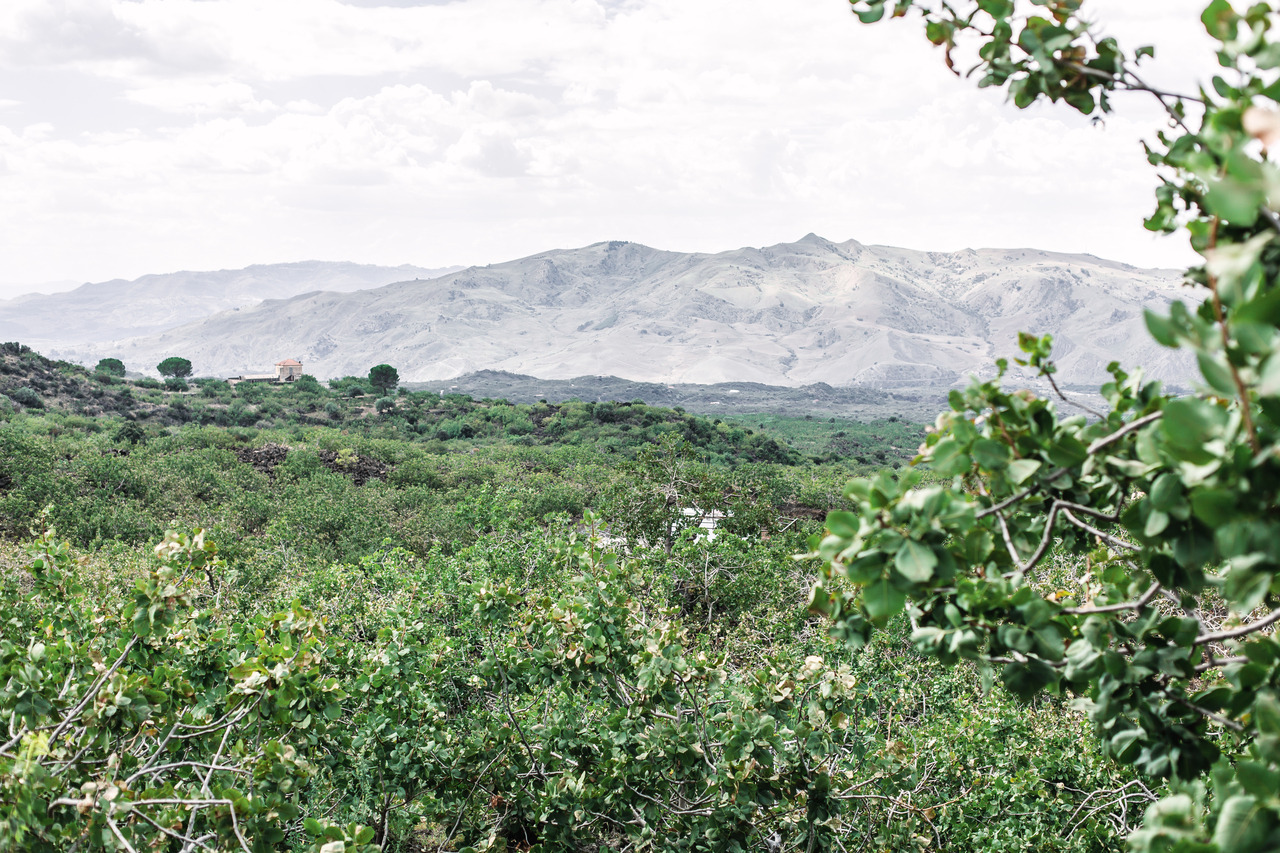 If the gigantic pistachio I passed along the way didn’t give me a clue that I had arrived in Bronte, I would never have known that the tangled mass of trees I passed along the way, were, in fact, of the pistachio kind. I pulled over to the first cafe I could find  – Bar Collina Verde, and had the best pistachio granite of my life while waiting for Nicolo Pace. 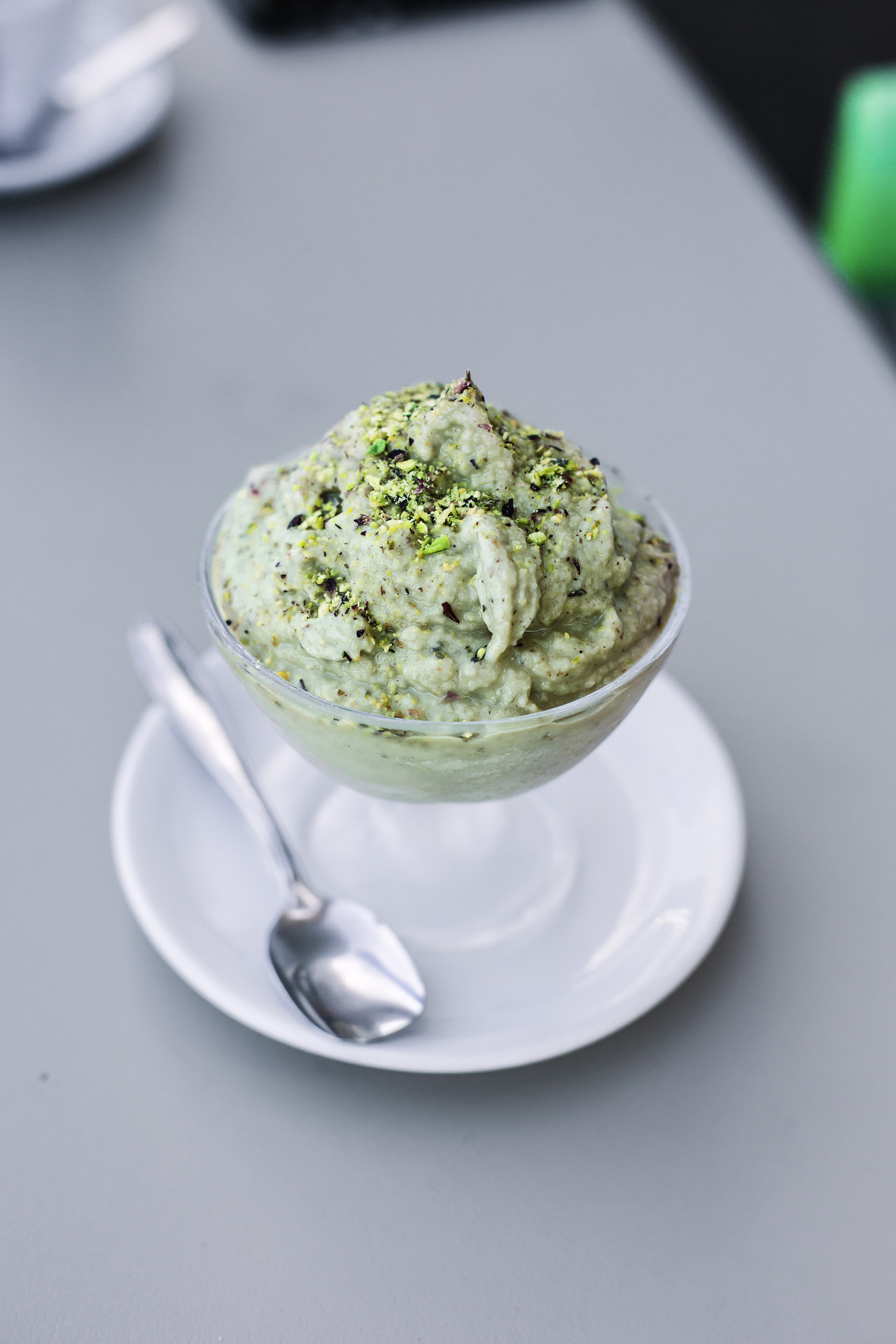 At 22 years old, he’s the younger generation of pistachio farmers in Bronte who are inheriting plantations from their fathers. He tells me that he is studying Food Science and Technology in order to improve innovation in pistachio farming in this area. “Bronte pistachios are the finest and most expensive in the world because we only harvest every 2 years. It takes patience but the quality is the most important thing to us. Real Bronte pistachios have PDOP (Product Designation of Origin) – they are bigger, saltier and have darker skin than any other pistachios.” 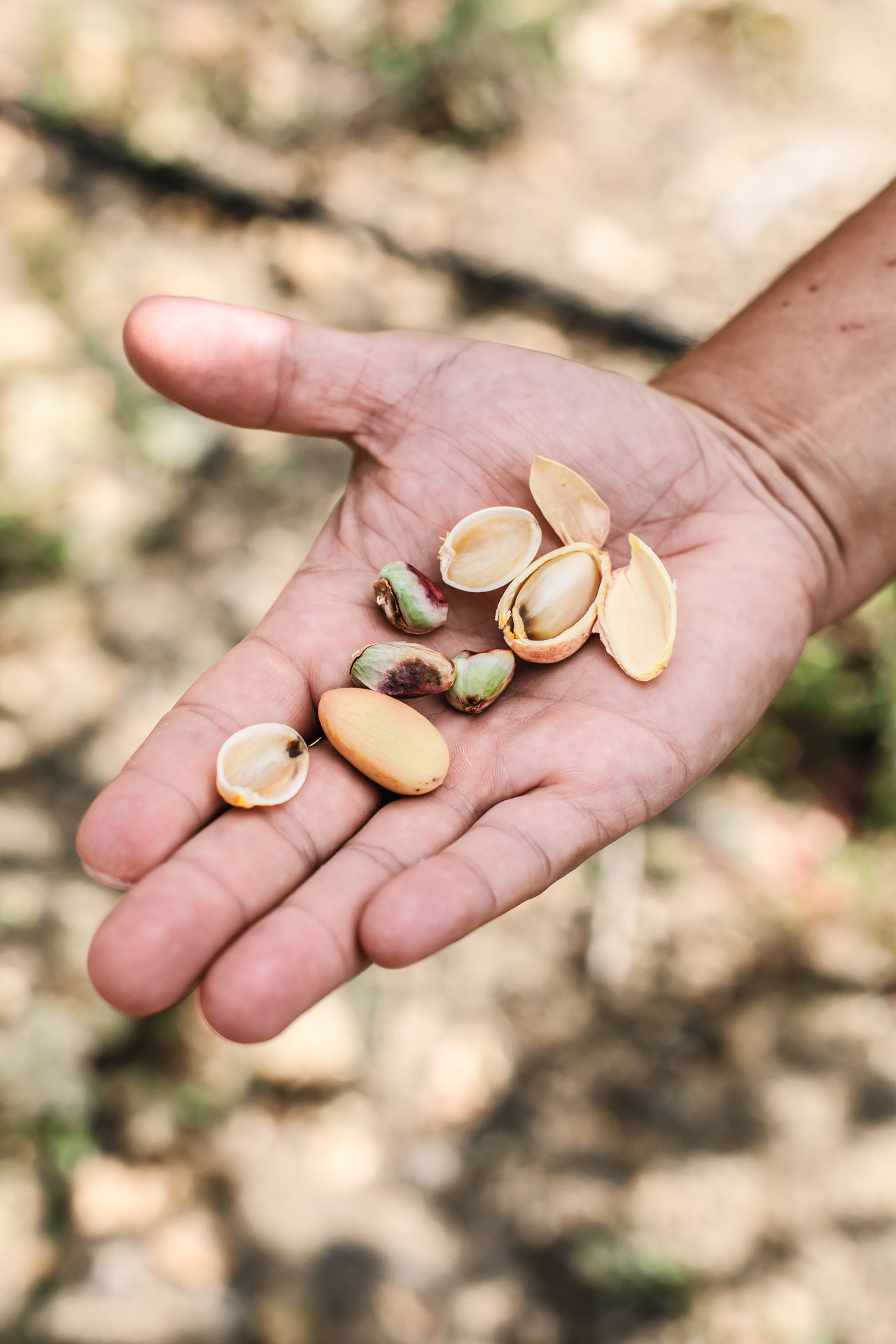 As I fire a million questions at him on what are called ‘emeralds’ around these parts we whizz along an alarmingly bumpy, steep road in Nicolo’s car before arriving at his modest family farm. 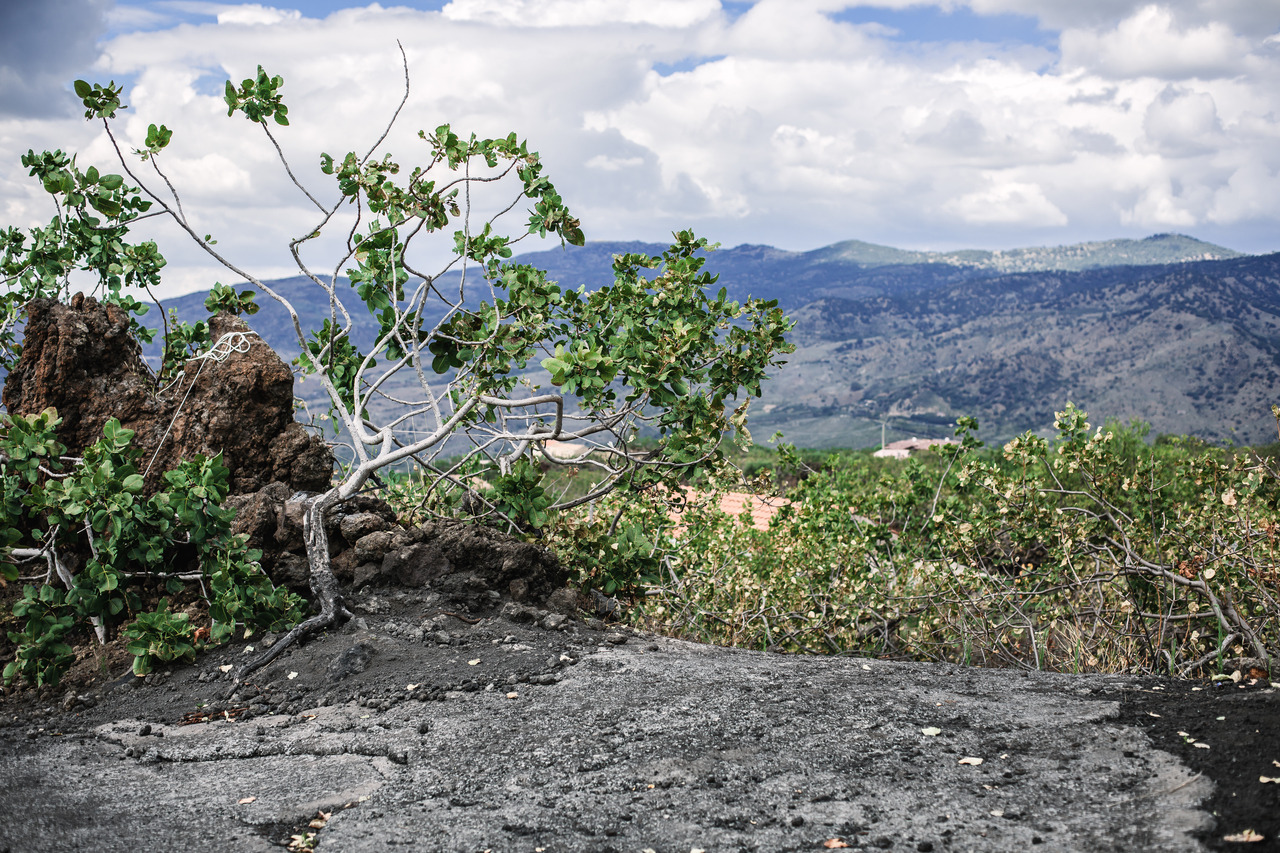 A quint little house on a floor of lava rocks (we’re in Mount Etna land, after all) is surrounded by the same tangled mass of trees sprouting straight out of the hard black stones. 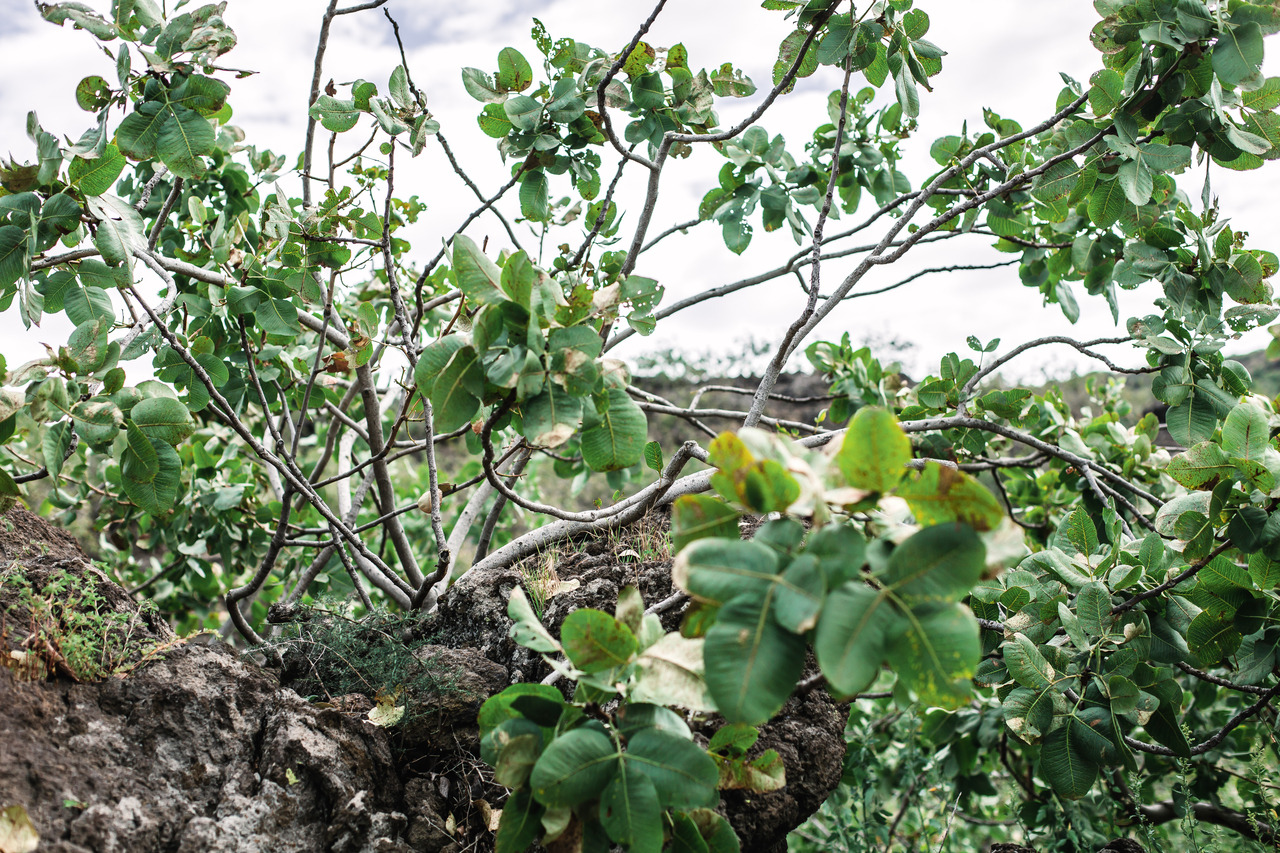 We trek across the hot rocks (‘mind the vipers, he tosses casually over his shoulder’!) until he excitedly points to a branch laden with bright red drupes. 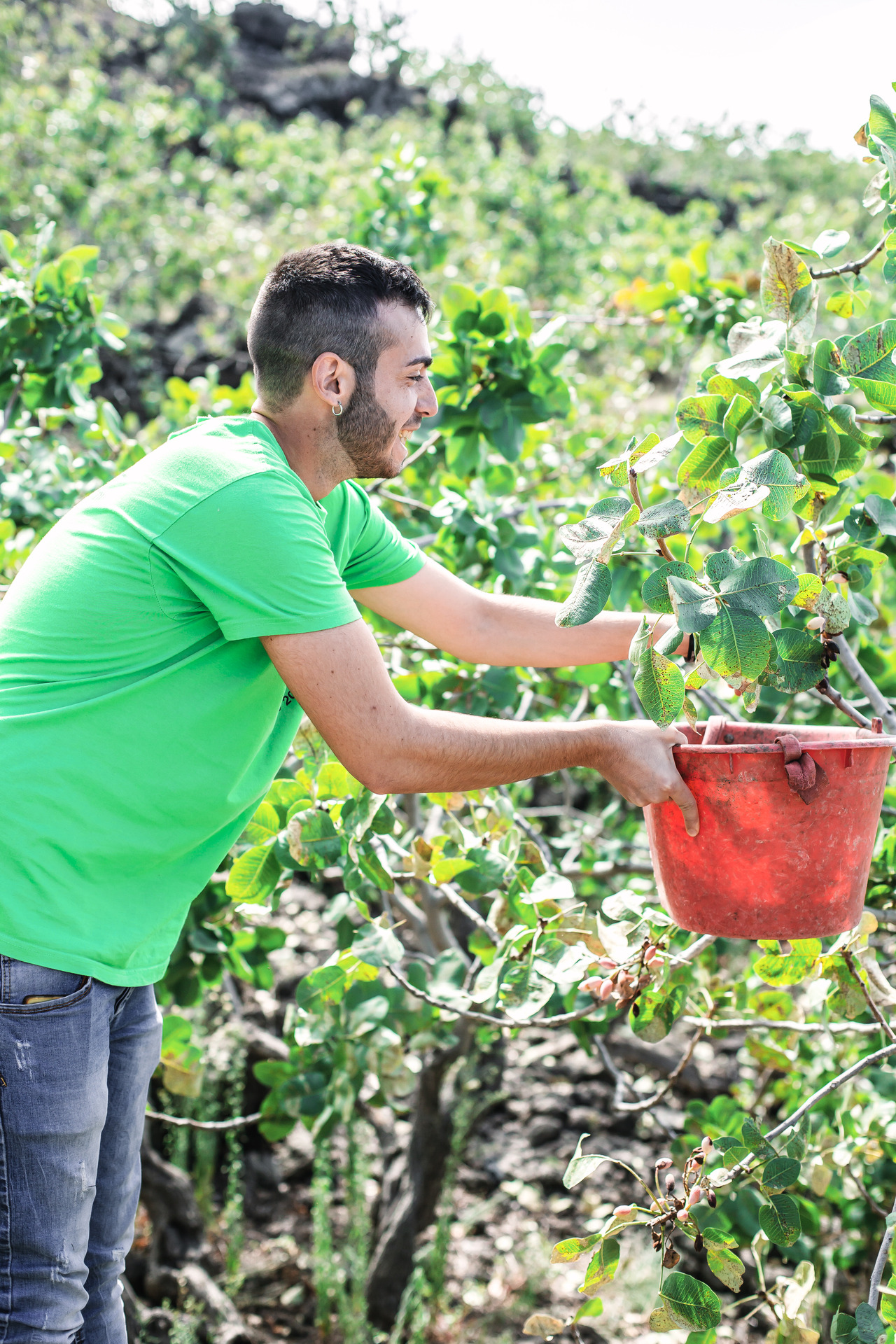 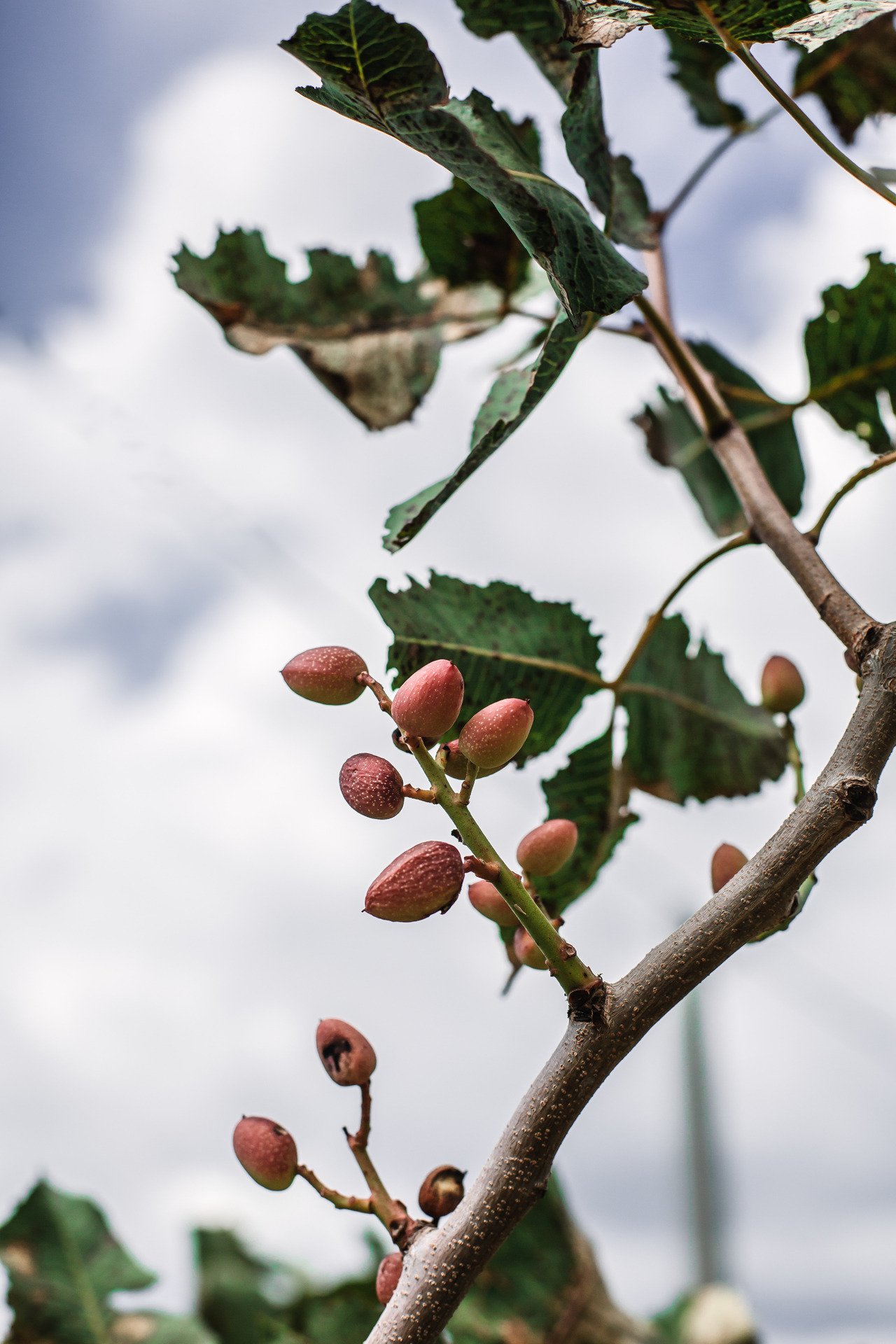 As the drupe (fruit) ripens, it splits open to reveal the seed (not nut) inside. The drupes have to be hand collected and dried in the sun before the pistachios can be sold. 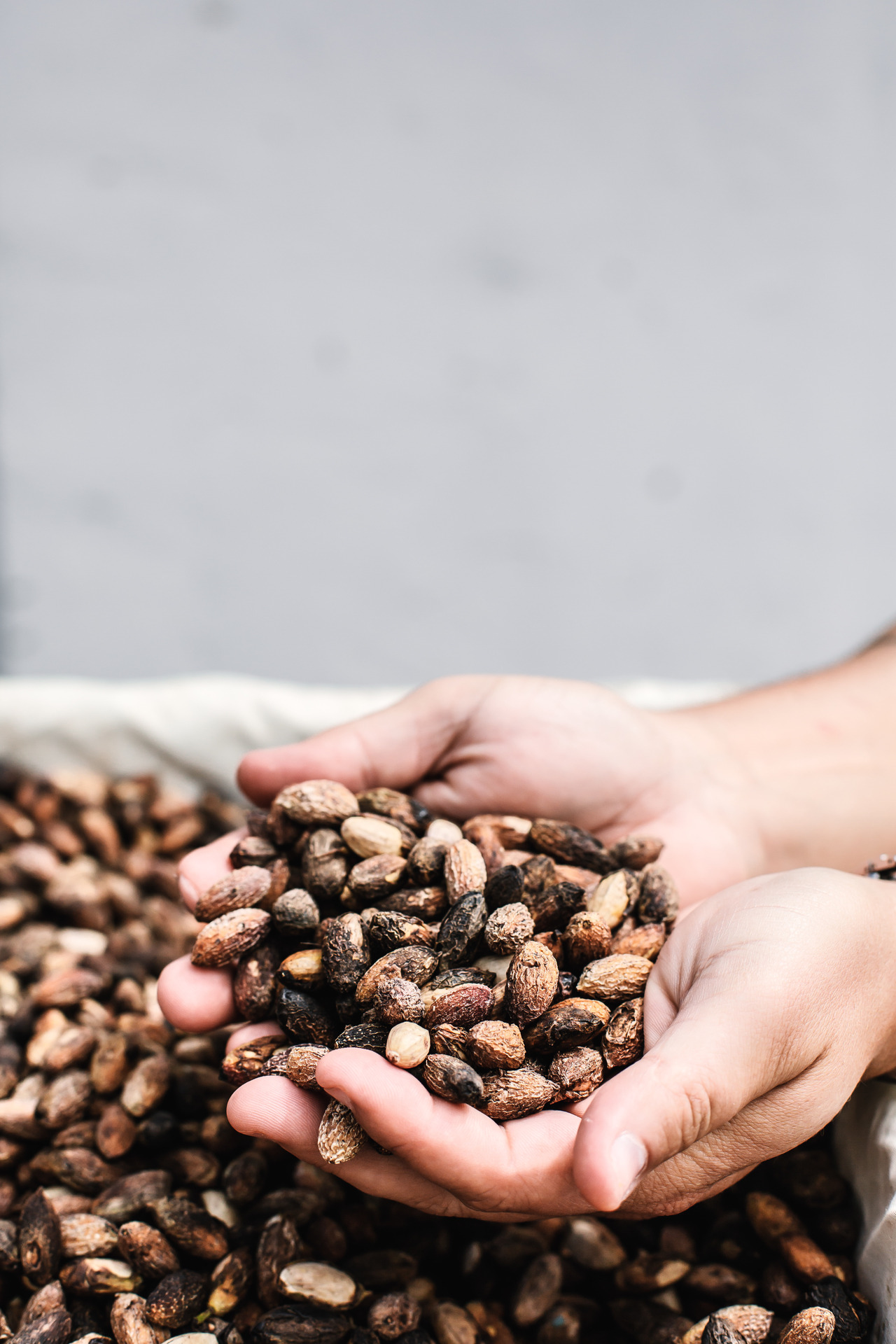 Harvesting is hard work and Nicolo rewards me with a lunch of ice cold prickly pears. I leave with a bag full of Bronte’s finest green gold – the best kind of padkos! 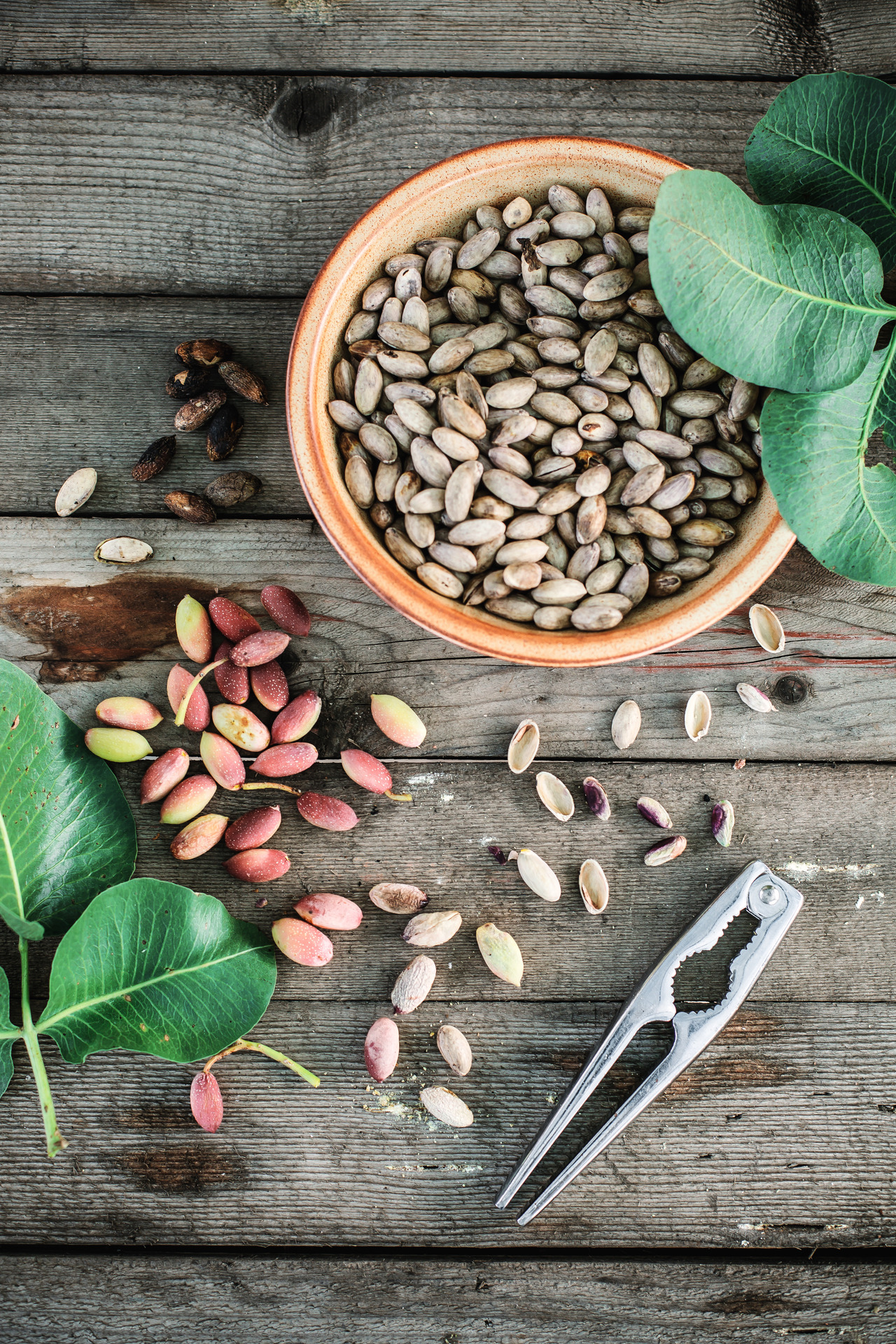 What to order: The arancini (not arancine as they are known in Parlermo) which are shaped like the nearby Mount Etna. 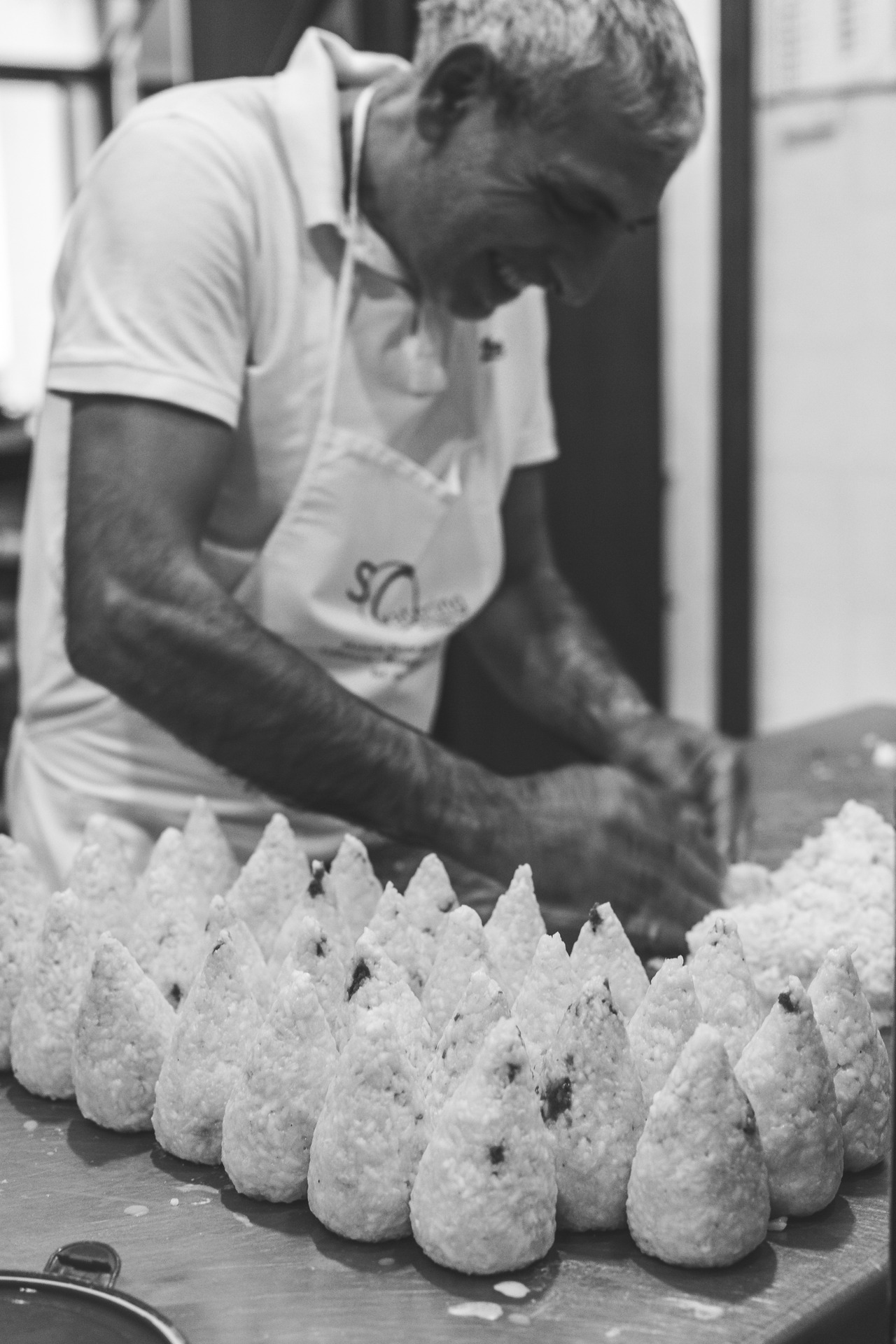