Gammon is like the dessert of the Christmas savoury world. It’s hands-down the best part of Christmas lunch (apart from well, dessert) and I’d be happy and willing to give up every part of Christmas lunch (Turkey – bleh.) but I will pretty much have a fight to the death for gammon.  I wouldn’t risk my life for just any gammon though – only my Nanna’s gammon, which is simmered in ginger beer and crusted with caramelized brown sugar. If there is one recipe that really has been passed down through the generations, it’s this gammon. In fact, the recipe is so special that we always make sure that at least 2 people in the family know how to make it – you know, just incase!

I’ve taken a bit of creative licence with Nanna’s recipe and given it an extra South African spin by adding naartjie (Clementines) but you can totally stay traditional and go with the pineapple rings. Just don’t make the mistake of using fresh pineapple – it has to be the tinned stuff, otherwise it just doesn’t taste the same (I’ve tried). Nanna always glazed her gammon with brown sugar but proper Muscovado sugar is just glorious on this – it’s rich and molassesy and forms a glossy varnish that isn’t just sweet and sticky but tastes good too! Now, go make sure you share this recipe with someone else in your family, you know, just incase! 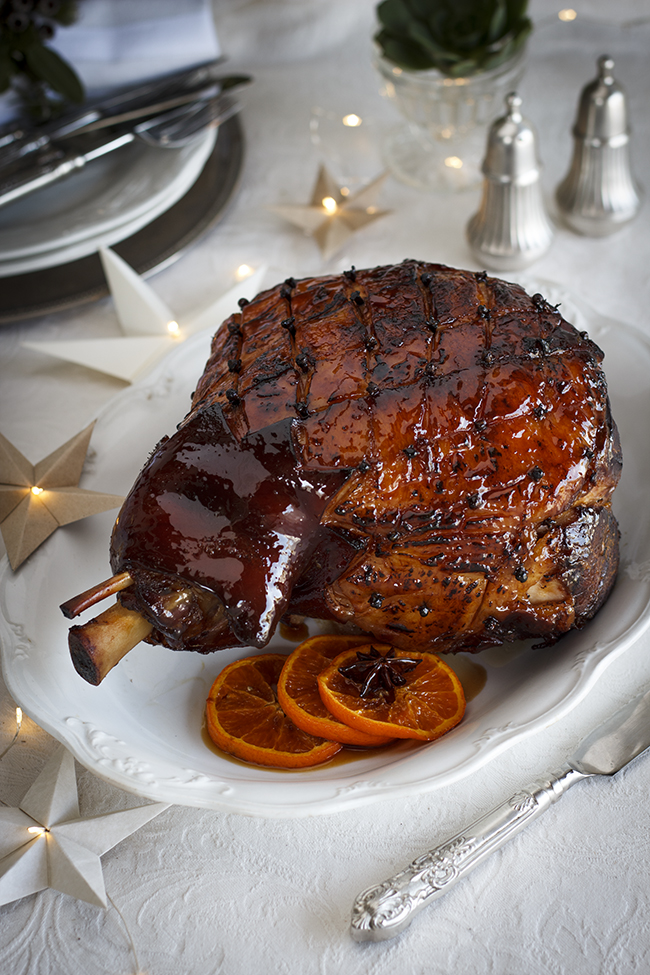 Preheat the oven to 150°C.  Place the gammon, skin-side down, in a large ovenproof roasting dish.

Pour over 1,5L of the ginger beer, add the naartjie rind and juice from 3 of the naartjies (optional), the onion, celery, carrot, star anise, cinnamon stick and bay leaf.

Cover the roasting dish with foil and place in the oven until the ham is tender, about 3 hours and 30 minutes. Pour off the cooking liquid and allow the gammon to cool slightly.(You could boil the ham on the stovetop too but my gammon was so huge I didn’t have a pot that it would fit in!)

In a small saucepan over low heat, warm the remaining ginger beer, naartjie zest and juice and the sugar until dissolved. Bring to a boil then simmer until slightly thickened, about 5 minutes. Increase the oven temperature to 200°C.

Lift the skin off the gammon, making sure to leave a layer of fat, then score the fat into diamond shapes. Press a clove into the tip of each diamond shape then return to the oven dish, brush with the glaze and roast in the oven until caramelised, basting every now and then until golden and glossy, about 20-30 minutes.

TIP Caramelise naartjie slices in a pan with a little muscovado sugar and serve with the gammon for a local take on the traditional pineapple slices.