These macarons are made with desiccated coconut instead of almonds making them the perfect nut-free alterantive to traditional macarons. These ones are filled with caramel buttercream and shards of peppermint crisp chocolate. 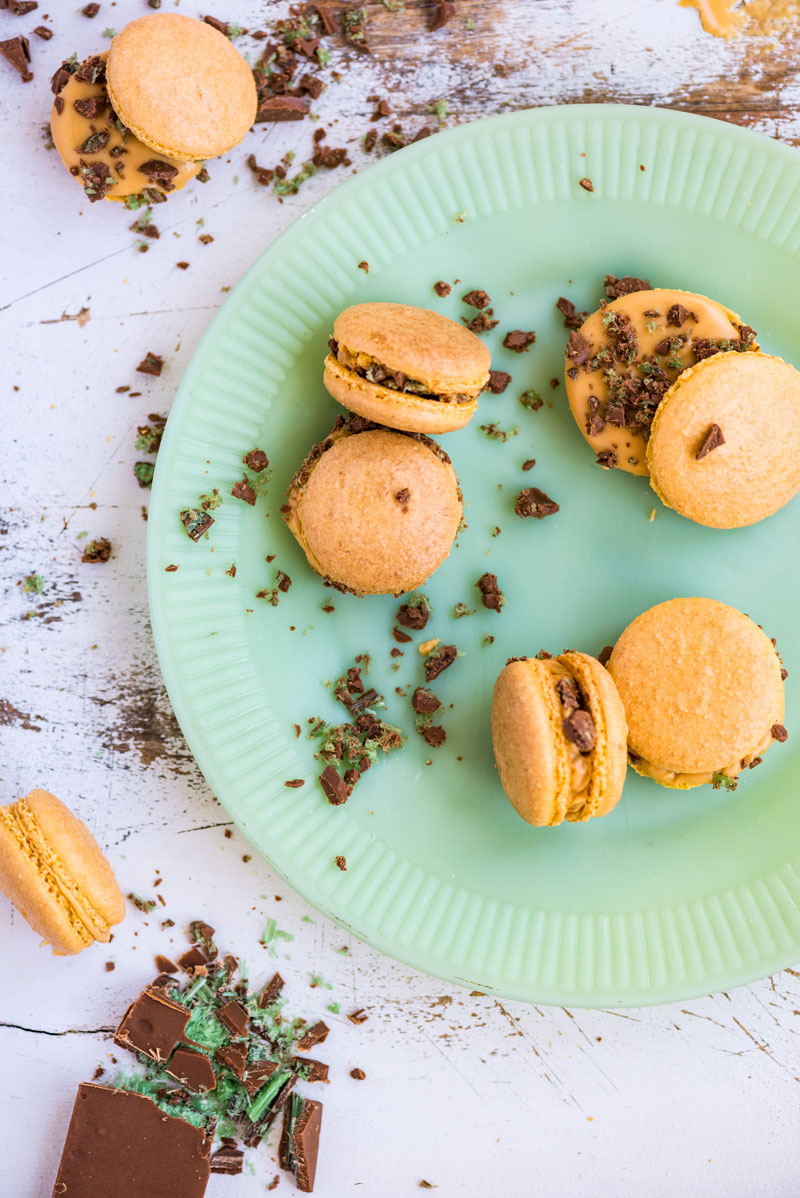 It’s World Baking Day on the 17 May, which is basically like Christmas for me, so if you love baking as much as I do then you’re going to want to bake up a serious storm! But what’s a day dedicated to baking without a challenge, right? There’s nothing more challenging to bake than a macaron. They’re infuriatingly tricky but there is nothing more rewarding than getting them right. And it does take practice – take it from these pastry chefs, they’d know! 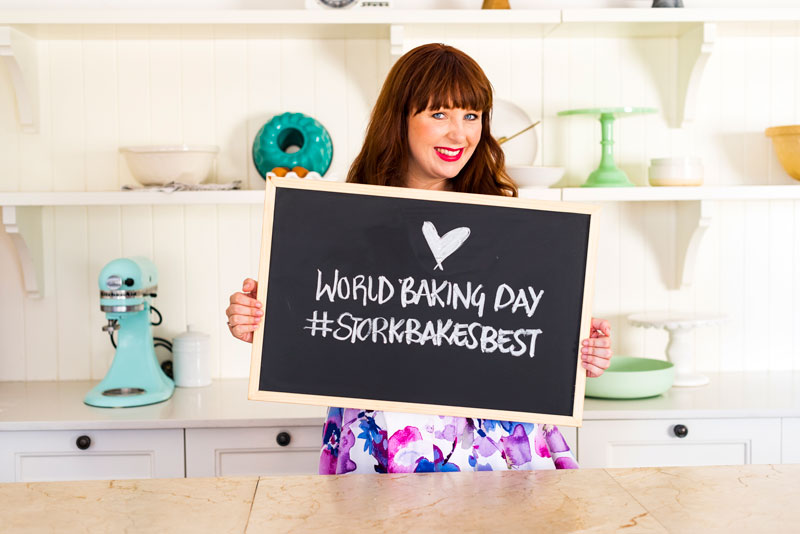 Macarons can be pricey to make (I don’t need to tell you that ground almonds and butter cost a kidney, guys) so I’ve developed a recipe which is MUCH more affordable but delivers on flavour and texture! I’ve developed this macaron recipe uses ground up desiccated coconut to replace the almonds and it works like a bomb. Sandwich that together with a luscious buttercream made with Stork Bake and caramel, roll it in shards of peppermint crisp and you’ve got an ode to our good old peppermint crisp tart that’s fancy and champions one of our local desserts. Win-win! 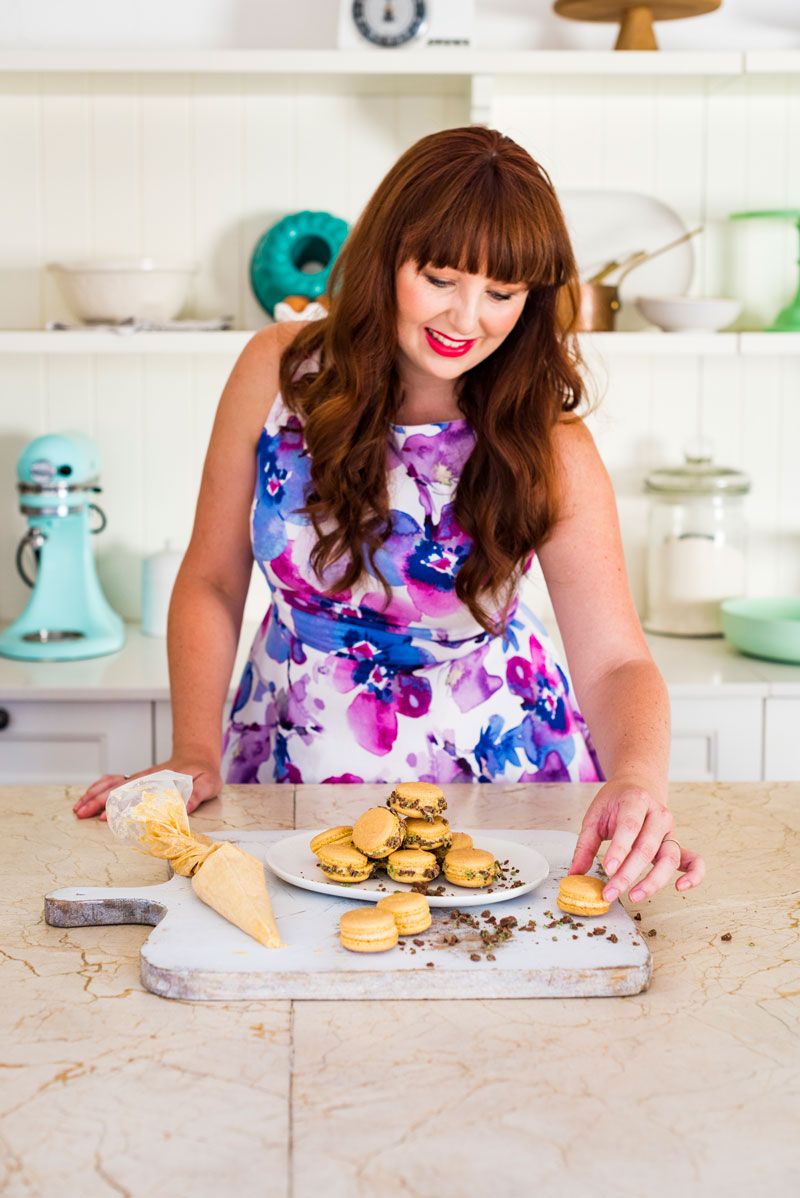 Remember that list of baking essentials I posted the other day? If you head over to Stork Bake’s Facebook page they’re giving away a R500 Yuppiechef voucher every day and on World Baking Day, you could WIN the grand prize of a R3000 Yuppiechef voucher and a brand new Kenwood Mixer! That’s plenty of cash to stock up on all the baking gadgets your heart desires! If you decide to make these macarons, please share your pictures with me on social media! You can follow me on Instagram, Facebook, Twitter and Pinterest. Happy baking! 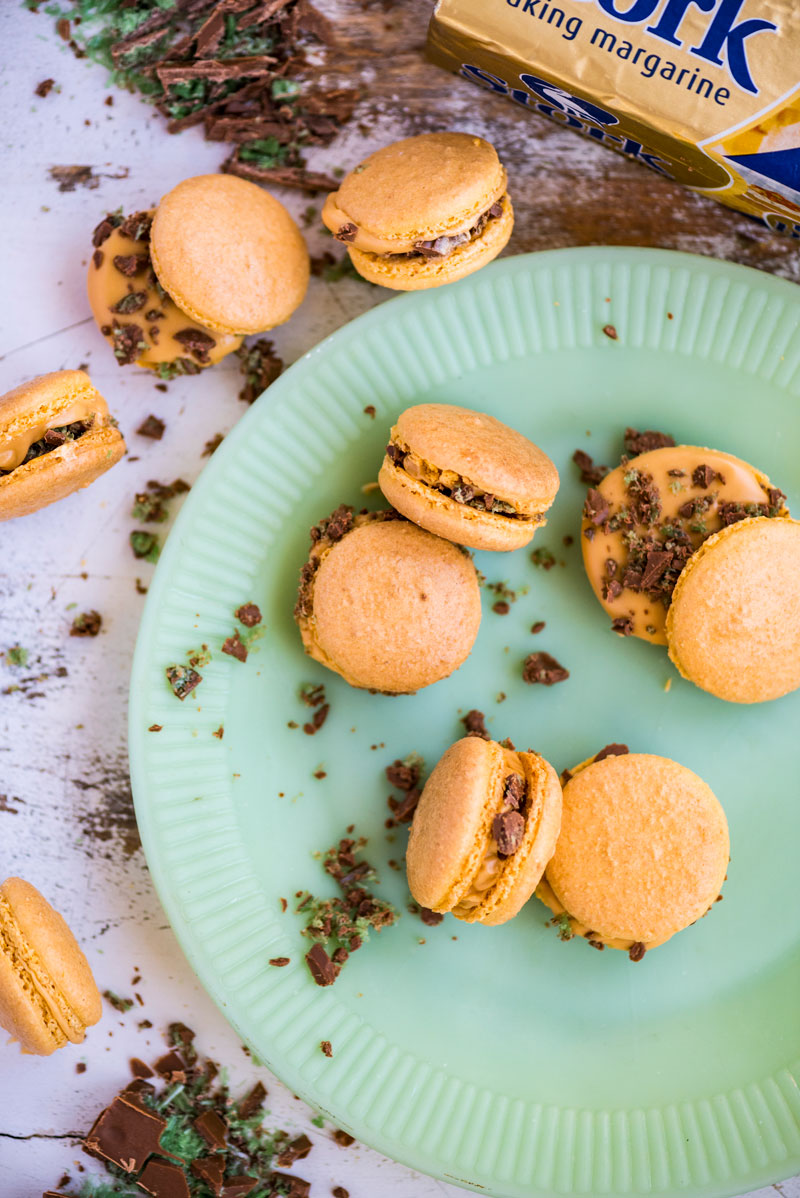 Line 2 x baking trays with baking paper or a silicone baking mat. Place the desiccated coconut, icing sugar and salt in a food processor and pulse until fine. Sift the mixture twice and pulse any remaining lumps until they pass through the sieve. Place the egg whites in the bowl of an electric mixer with the cream of tartar. Heat the sugar and water in a saucepan over medium heat and bring to the boil. Simmer until the syrup reaches 113 degrees Celsius on a sugar thermometer. Start whisking the egg whites until they reach soft peak stage then pour the hot syrup down the side of the bowl into the egg whites in a steady stream. Continue whisking until the meringue is thick, glossy and still warm to the touch. Fold the coconut icing sugar mix into the meringue in two parts, using a metal spoon, taking care not to knock the air out. Keep folding until the batter is glossy and forms a thick ribbon when dropped off the spoon (to test, drop a blob on the baking tray and tap 3 times – it should spread nicely). Place in a piping bag and pipe 5 cm rounds, leaving enough room for spreading. Tap the baking tray firmly on the work surface 3 times to remove the bubbles and for the macarons to spread slightly. Allow to sit at room temperature for 45-55 minutes or until the surface of the macaron no longer feels tacky to the touch (it shouldn’t stick to your finger). Preheat the oven to 95 degrees Celsius fan-forced (105 degrees conventional). When the oven is ready, place one tray of macarons in the middle of the oven and bake for 15 minutes then immediately increase the temperature to 175 degrees fan-forced (185 degrees conventional) and bake for 9 minutes. They are ready when the feet feel firm and the shells just come off the baking paper if you lift them. Allow to cool completely.

To make the buttercream, whip the Stork bake and icing sugar until light and fluffy then whip in the tinned caramel. Place in a piping bag fitted with a plain nozzle. Pipe the buttercream on one macaron then sprinkle with the peppermint crisp and sandwich together. Refrigerate overnight then allow to come to room temperature before serving.

NOTE Macarons are best eaten the day after assembling as they become chewy.