Dessert Paradise at the Festival Culinaire Bernard Loiseau in Mauritius

Mauritius is absolute paradise, but if you’re a guest at the Constance Belle Mare Plage during the Festival Culinaire Bernard Loiseau, well then you’re in a food-lovers dessert paradise too! 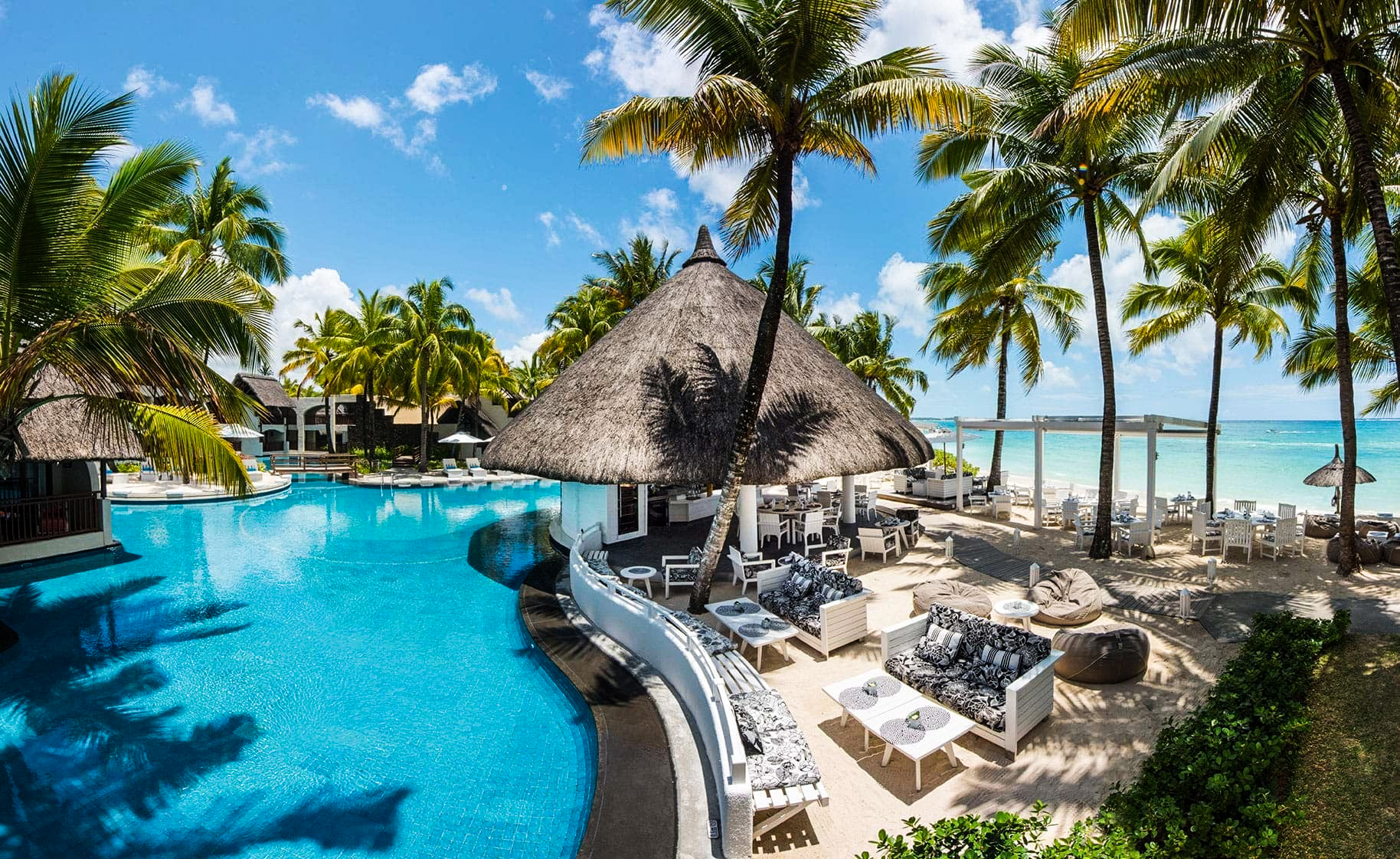 Yes, I sat here and ate lunch. Don’t hate me. 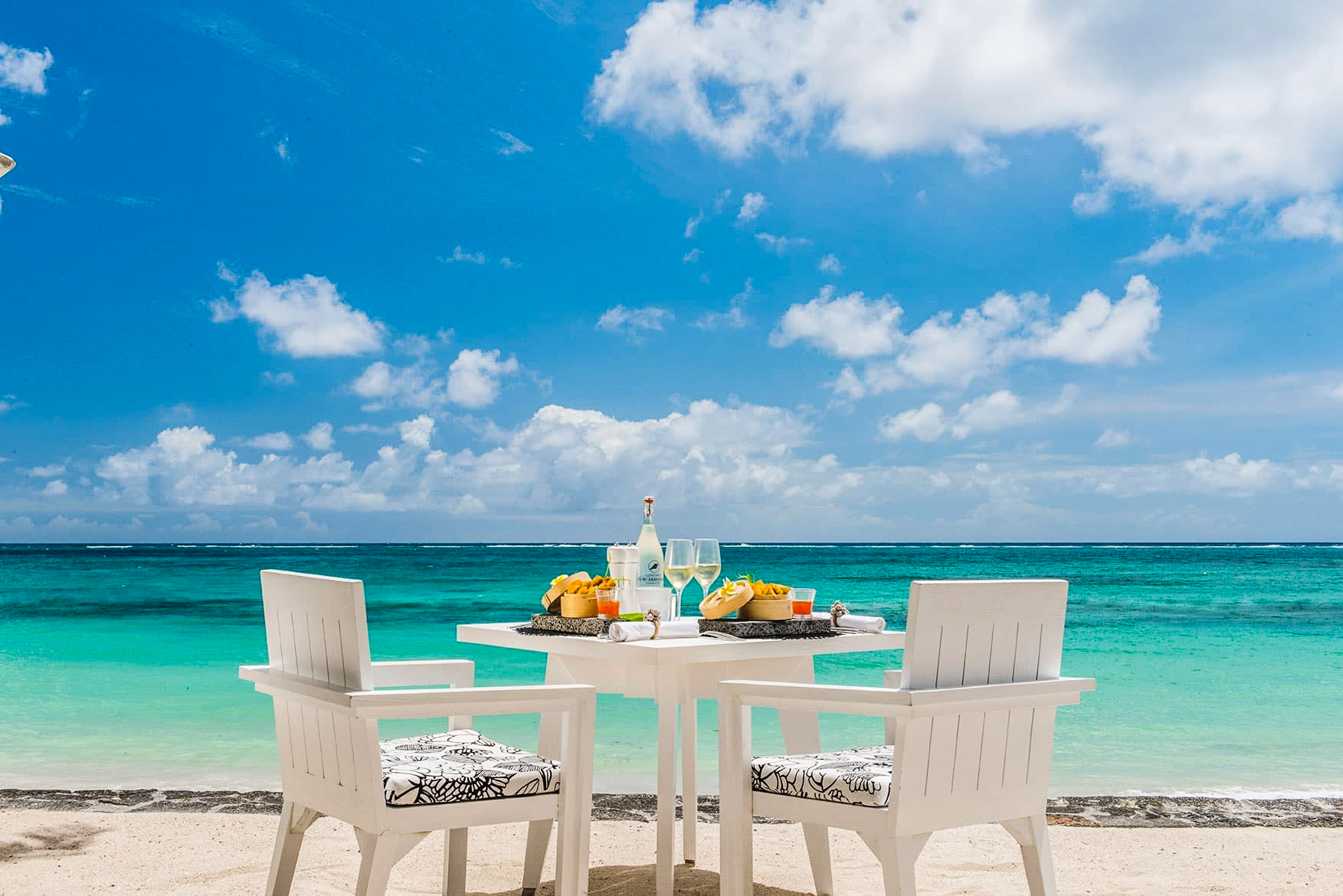 Six Michelin-star chefs from 6 countries, 6 Constance Hotel chefs from 3 islands (Mauritius, Seychelles and Maldives), 5 pastry chefs and 5 local ingredients. Five also happens to be the amount of kilos I gained during the most delicious food event of the year; the Festival Culinaire Bernard Loiseau. Held at the Constance Belle Mare Plage hotel each year, the festival is a celebration of food, sharing knowledge and being inspired by different cultures and cuisines. 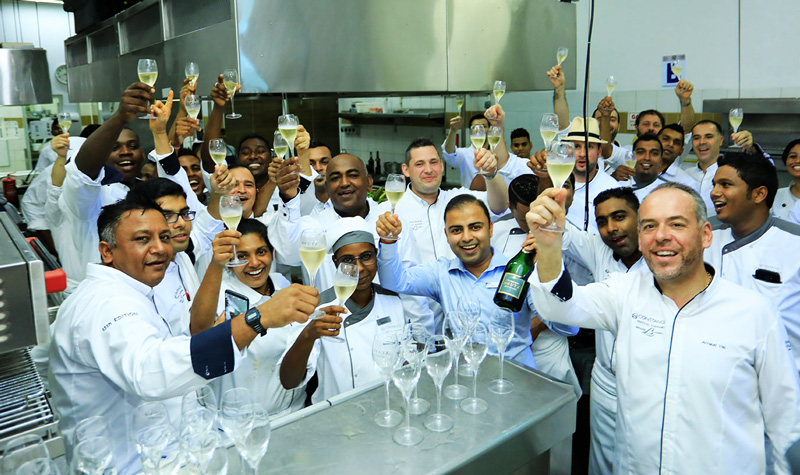 This year was particularly special because I was asked to shoot the artwork for the event. I did not expect to see the image I created literally EVERYWHERE! On book covers, on banners, it was even printed as a giant billboard (in front of which I did a happy dance, naturally!). 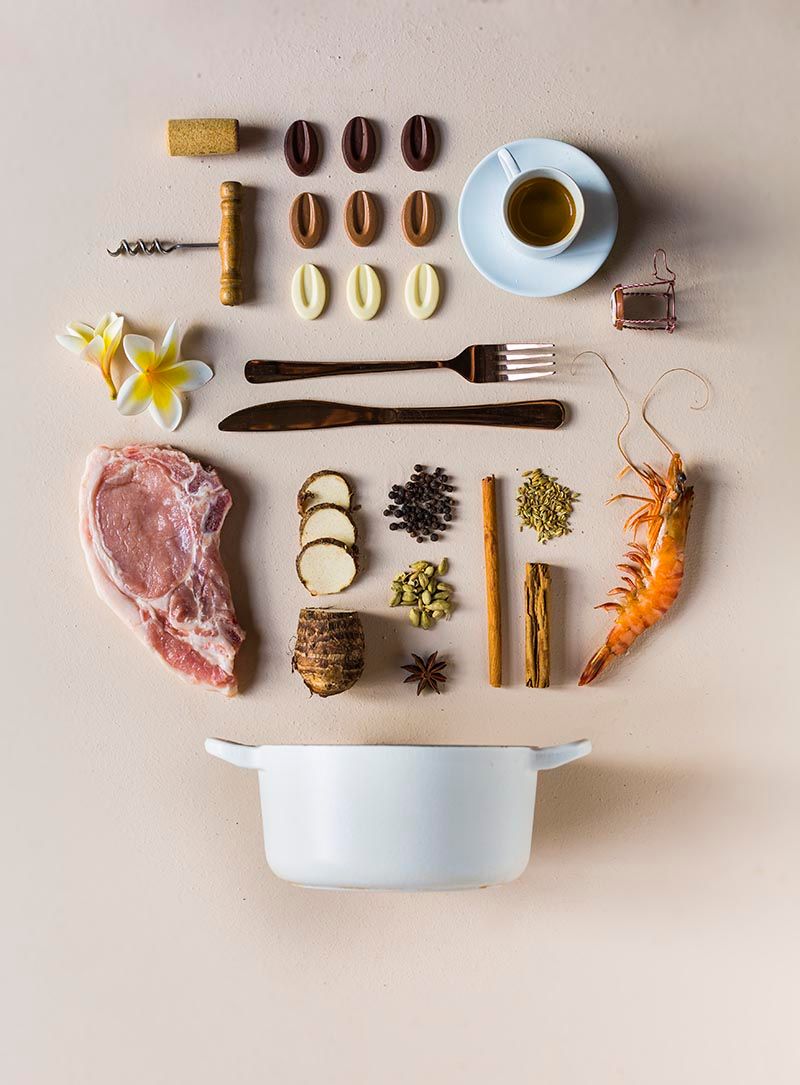 The main event of the Festival Culinaire Bernard Loiseau is a an epic culinary clash; 6 Michelin-starred chefs from around the world are paired up with 6 chefs from the Constance Hotels and Resorts properties and, with a few local ingredients, have to create delicious magic! And if you’re a guest at the hotel during this week, well, then you’re lucky enough to eat all the food they create. Below is just one of the MANY plates created by the winning team; Michelin-starred chef Michael Reis and Arshil Soopun from Constance Ephelia Seychelles. Crispy cream cheese gnocchi, pineapple, papaya chutney and raw marinated gourd – the dish included vanilla which I thought was so clever! 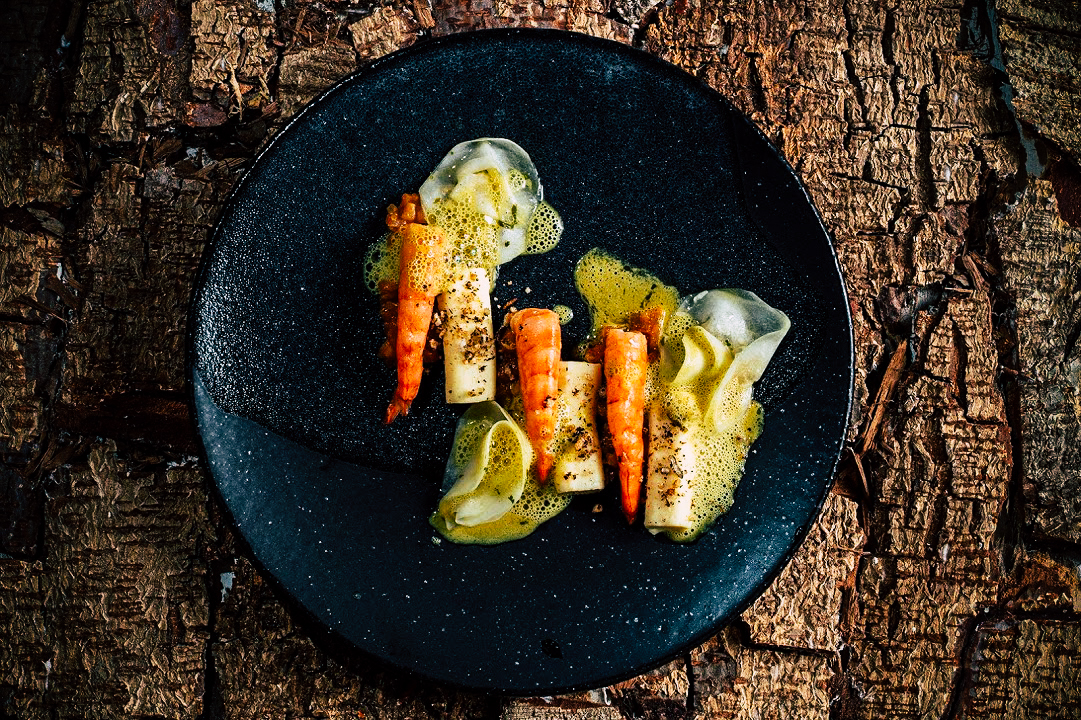 But if you know me well, you’ll know that I was only thinking about one thing: DESSERT! And boy, was it good dessert…  Alongside the main Festival Culinaire Bernard Loiseau competition was a serious pastry showdown between 5 of the Constance Hotel pastry chefs from the various islands of Seychelles, Mauritius and Maldives, because according to Executive Chef Nicholas Durousseau, a good menu is nothing without dessert (preach!). 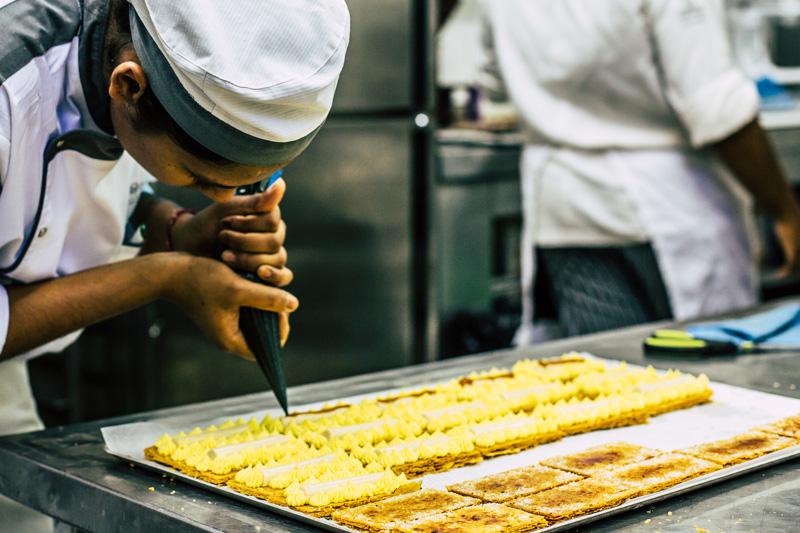 While the pastry chefs competed for the approval of Pierre Hermé (yes, the macaron master was there!), Mercotte (France’s Mary Berry) and other esteemed pastry professionals, I got to drool over and taste their magical creations. 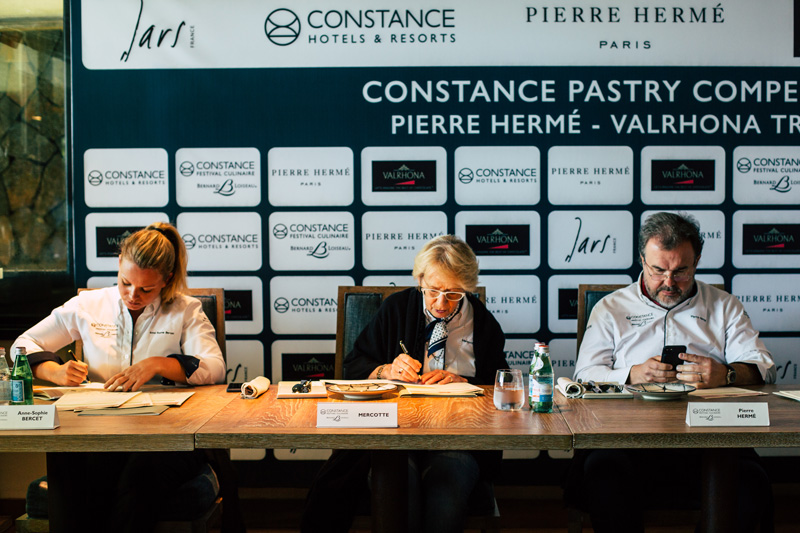 It’s not a competition without rules so the chefs  had to create a deceptively simple classic, Mille Feuille (puff pastry layered with pastry cream), a chocolate plated dessert, chocolate pralines as well as a towering chocolate showpiece to show off all their creations. 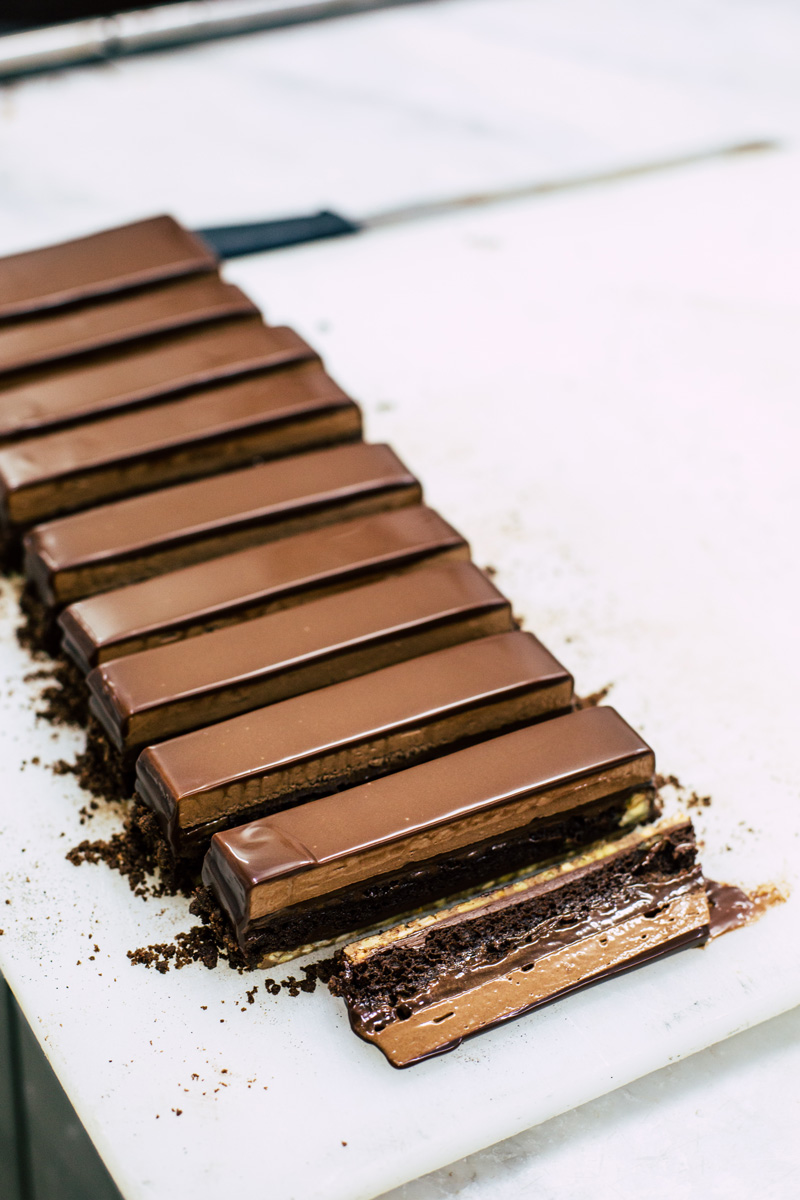 Mentored by Executive Chef Nicolas Durousseau and last year’s competition winner, Stéphane Labastide the two had some expert advice that even home bakers can use. “For me, it’s flavour above all else” explained Stephane – something which is a strong theme in all the desserts he serves up at the neighbouring Constance Prince Maurice Hotel. 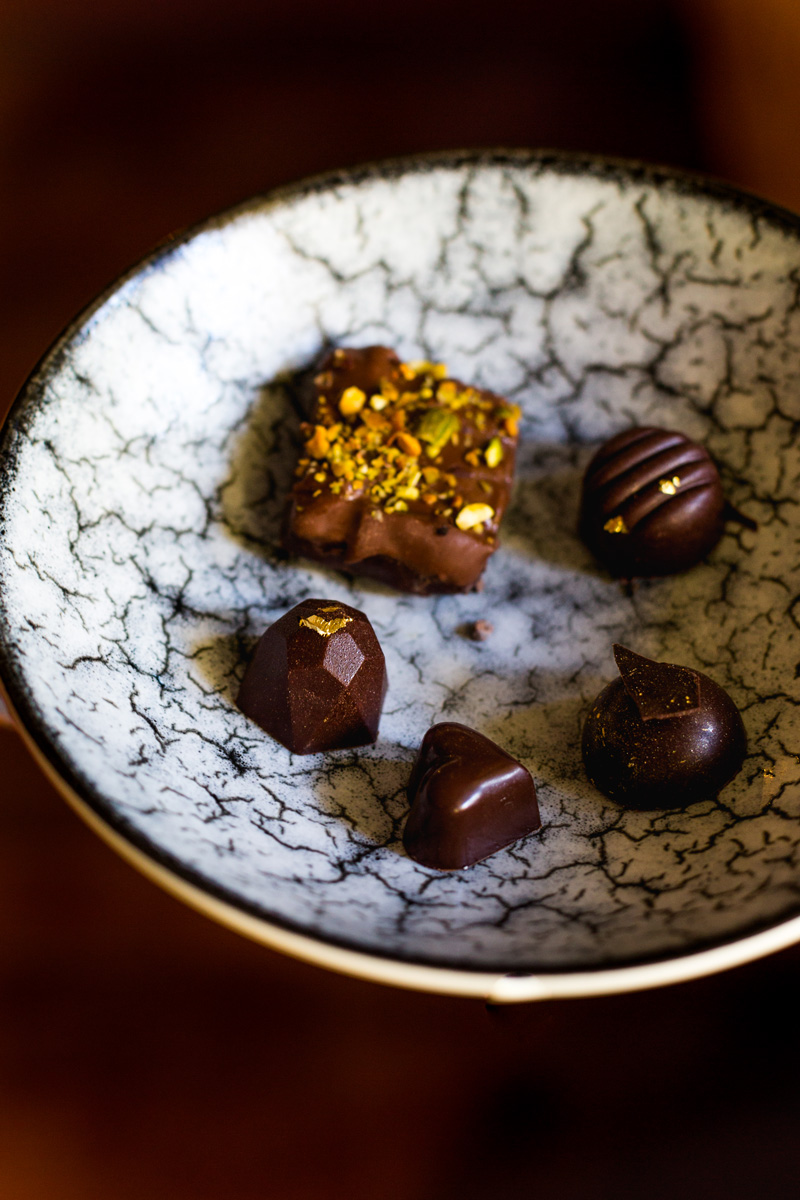 Nicholas’ 30 years of experience have distilled his advice into “keep it simple” – invaluable advice for most of us who tend to overcomplicate desserts in order to impress (especially when it comes to high pressure situations like entertaining). 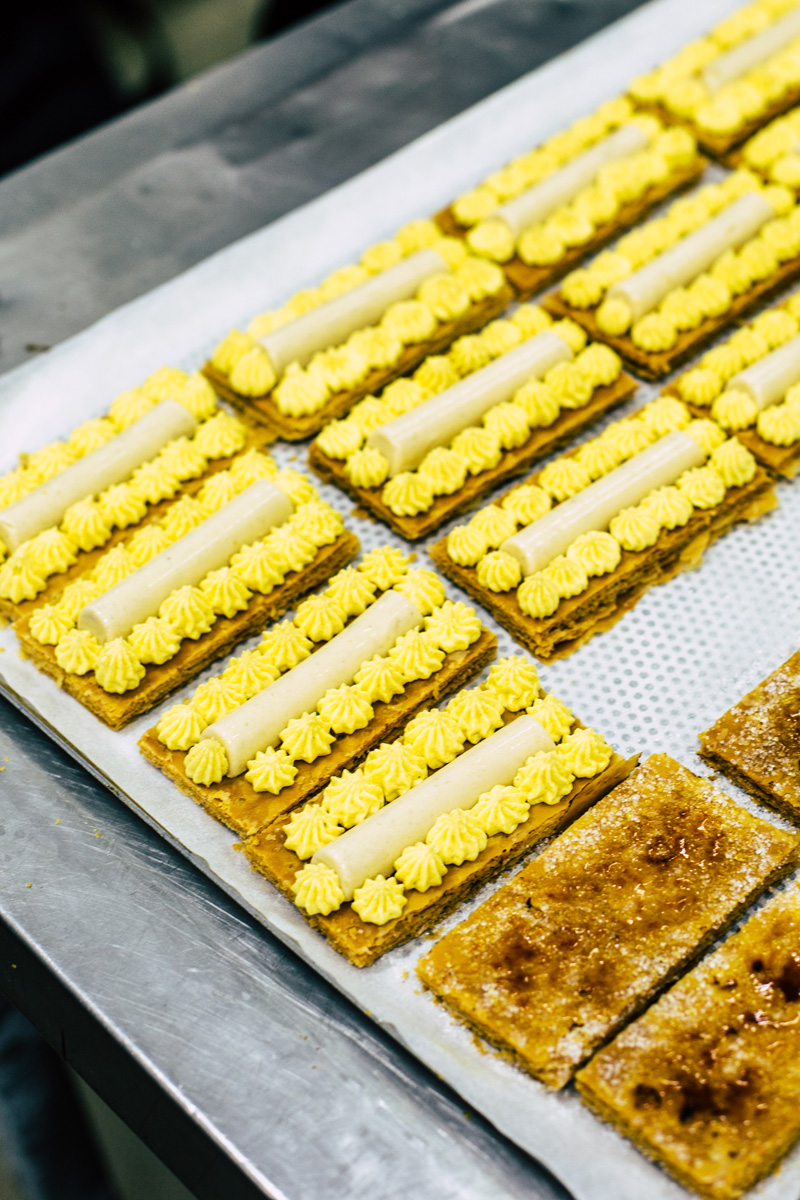 When the hotel said I could spend some time in the pastry kitchen, I don’t think they realised that I’d basically set up camp in there. Trying not to fan girl or get in the way, sticking around eventually paid off when the pastry chefs started feeding me treats. Pastry chef Iqubal Shaikh from Constance Halaveli in the Maldives won me over immediately when he plied me with his cardamom-spiced chocolate truffles. Chocolate connoisseurs might argue that they were a little big, but Iqubal is clearly my kinda guy because when it comes to chocolate – it’s go big or go home! 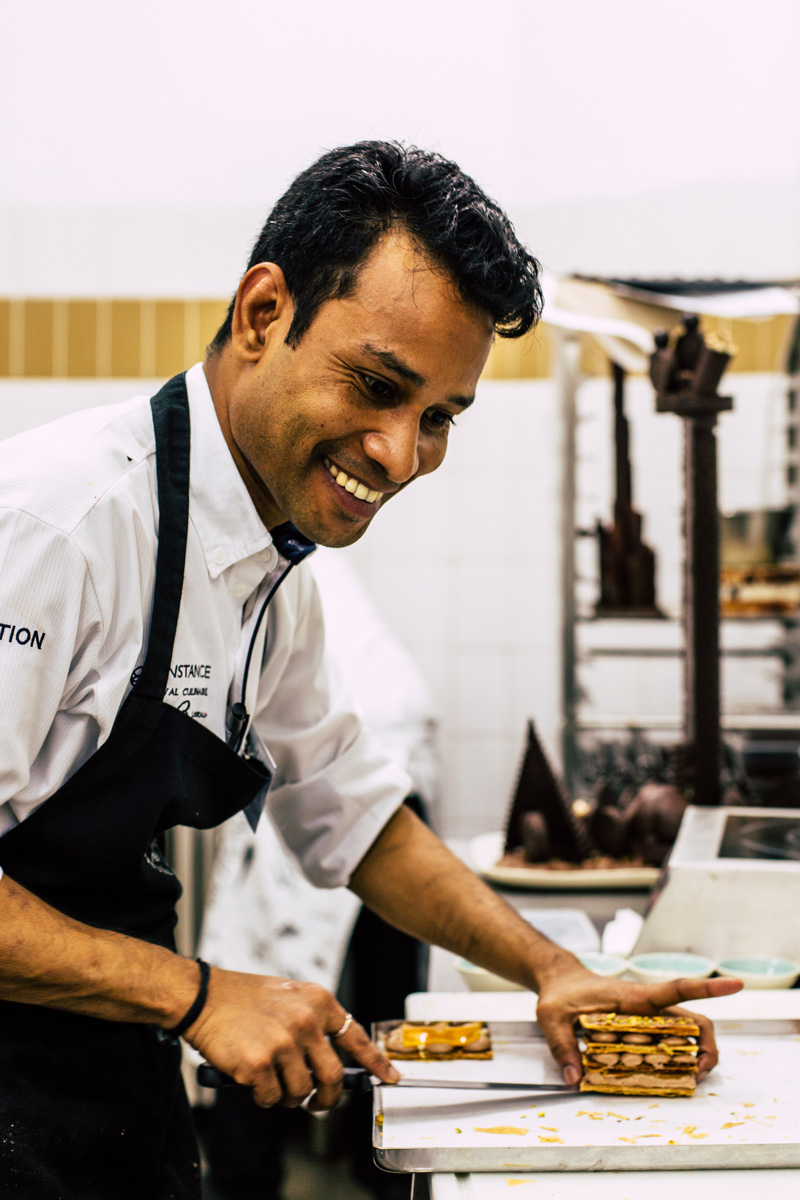 Pastry Chef, Ellam Joghee wrapped perfectly tempered chocolate collars around his chocolate crème brulée centres which were layered with a brown butter shortbread, chocolate mousse and a chocolate biscuit (how good does that sound?!) 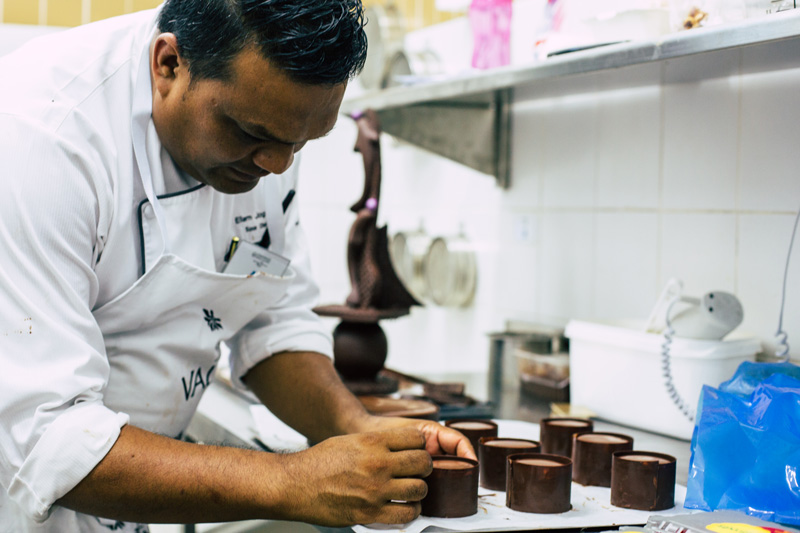 I loved the inspiration Grace Lucas took from the beautiful Jars plates the chefs were given. Her dessert looked like it belonged on a beach in Seychelles – her home country. Underneath the white mirror glaze and purple lavender gel was a matcha crème brulée , shortbread biscuits and a cocoa dacquoise (nutty meringue). 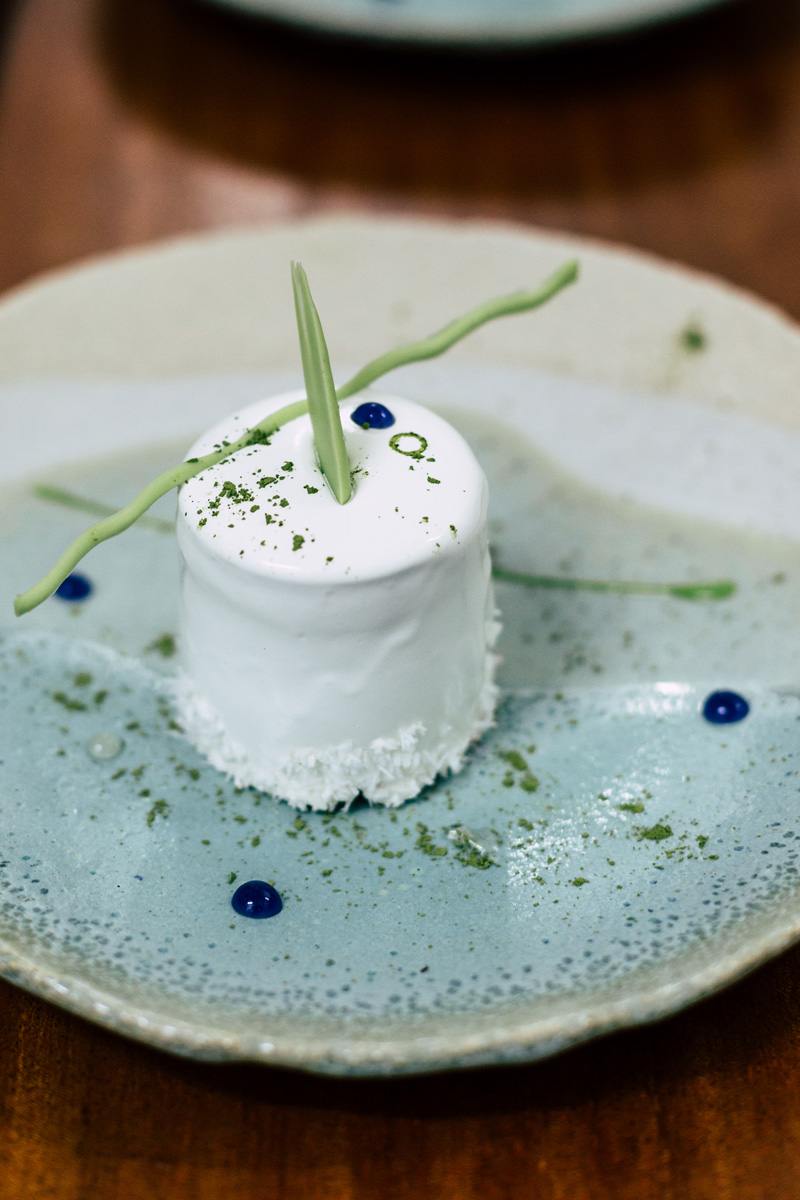 Gilles Refloc’h from Constance Lemuria Seychelles created my favourite chocolate sculpture. A giant chocolate egg complete with chocolate creatures. It was magnificent – the pictures just don’t do it justice! 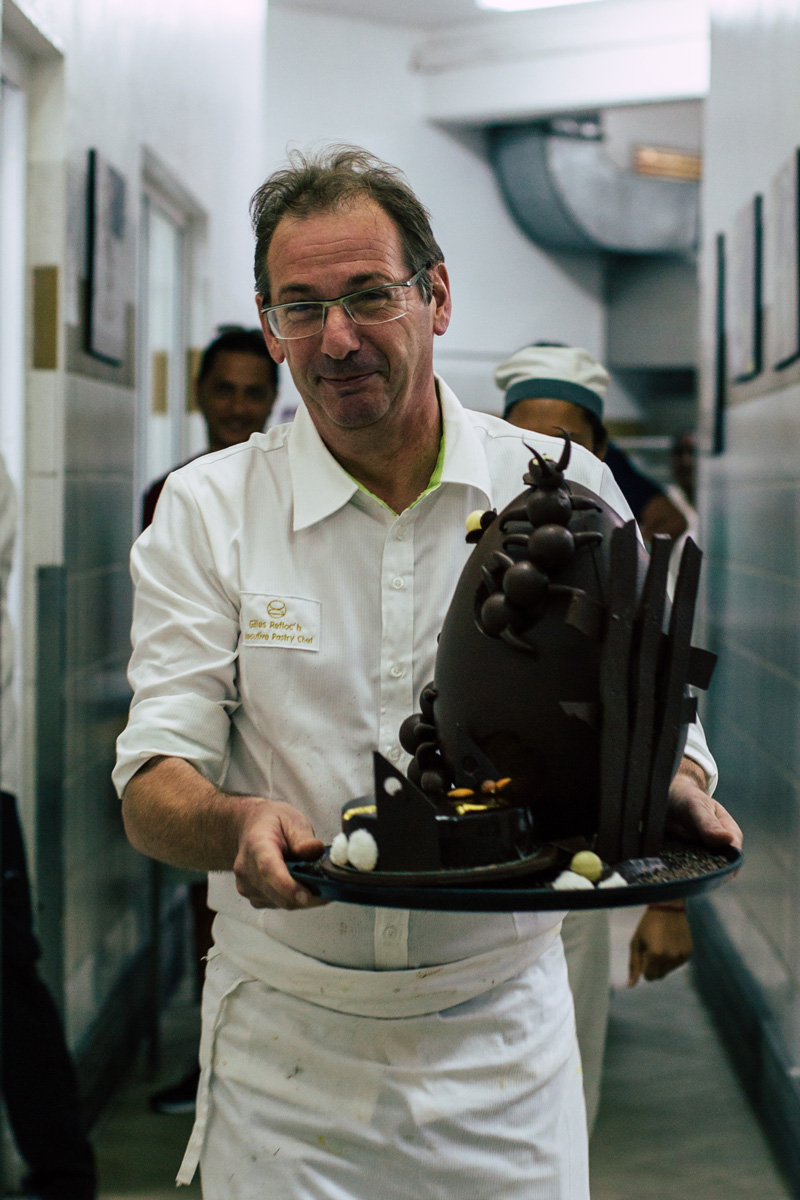 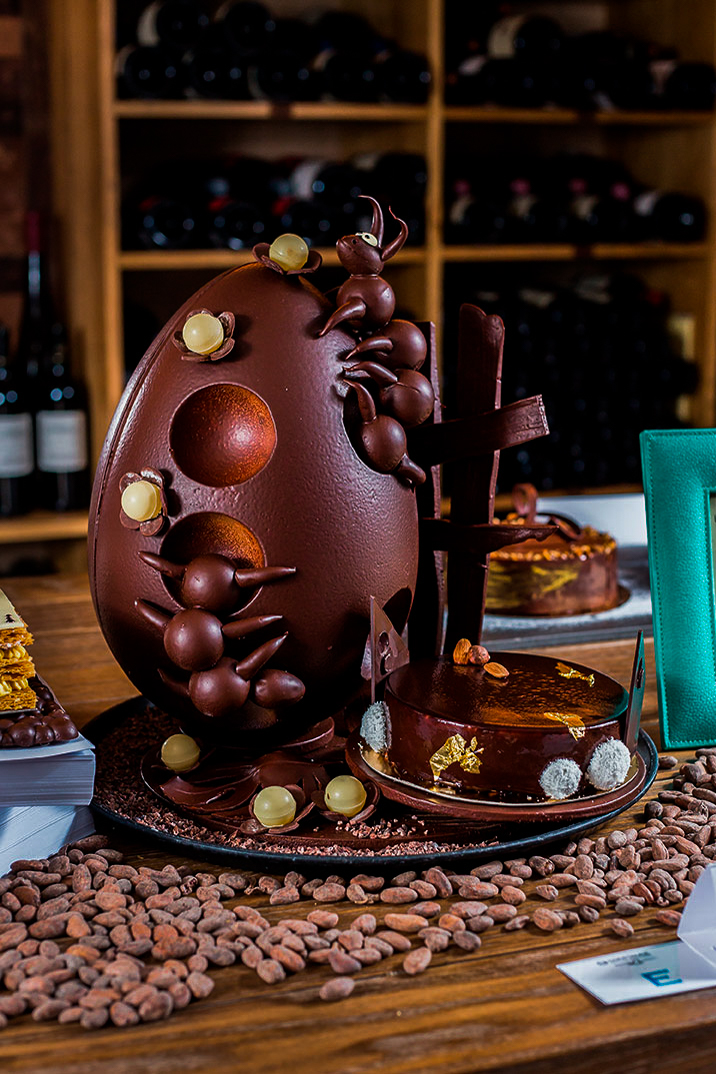 With so much talent in one kitchen, I don’t know how the judges chose a winner! But in the end, it was the elegant and flavour-packed desserts of Iven Chitray who took the coveted Constance Pastry Competition Pierre Hermé – Valrhona Trophy back to the Constance Prince Maurice pastry kitchen! 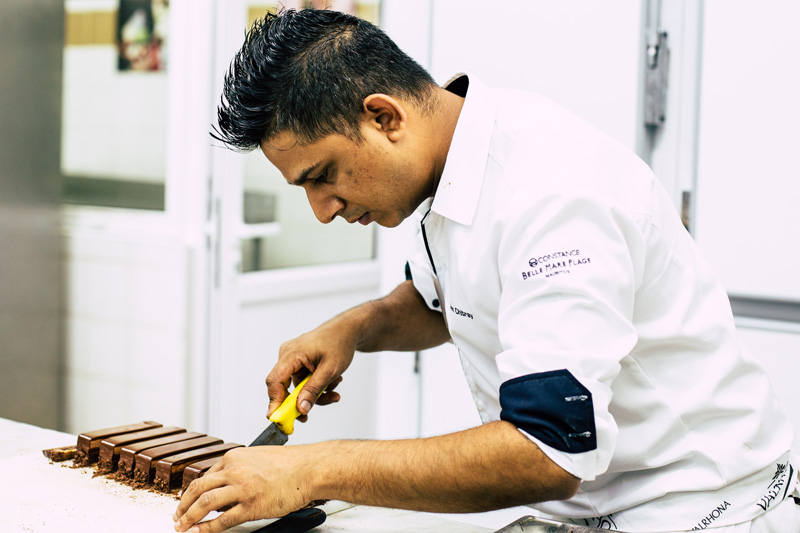 His jaw-dropping chocolate mousse sensation consisted of praline, hazelnuts, milk chocolate, a biscuit layer, a chocolate cremeaux and chocolate ganache. The moment I saw him slicing it in the kitchen, it was love at first sight! 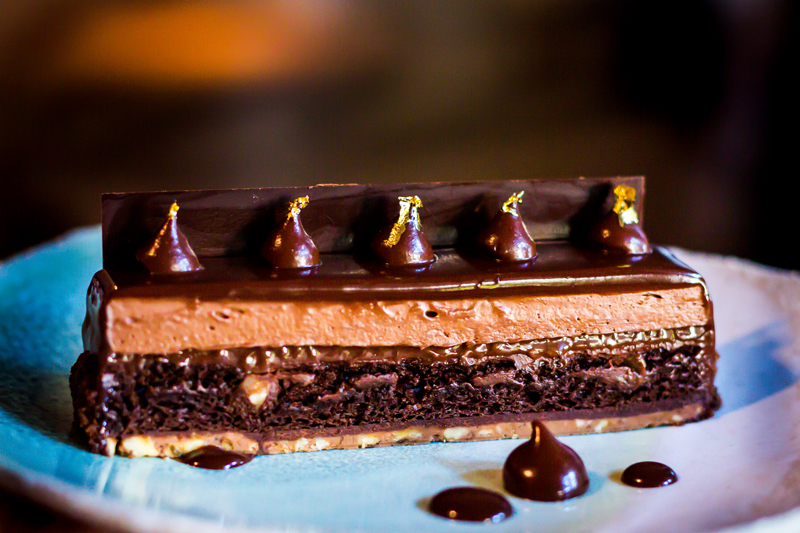 Iven used a white chocolate and vanilla ganache to sandwich the puff pastry together for his Mille Feuille. He then szhooshed it up with bananas, passionfruit and a local lime called ‘kumbava’. He explained to me that while mille feuille looks simple, the key to its success is making sure you slice the baked pastry against the grain when assembling it. Much like you would cut a steak against the grain to make sure it’s tender. This is the secret to puff pastry layers that crumble as your fork plunges into them. You learn something new every day! 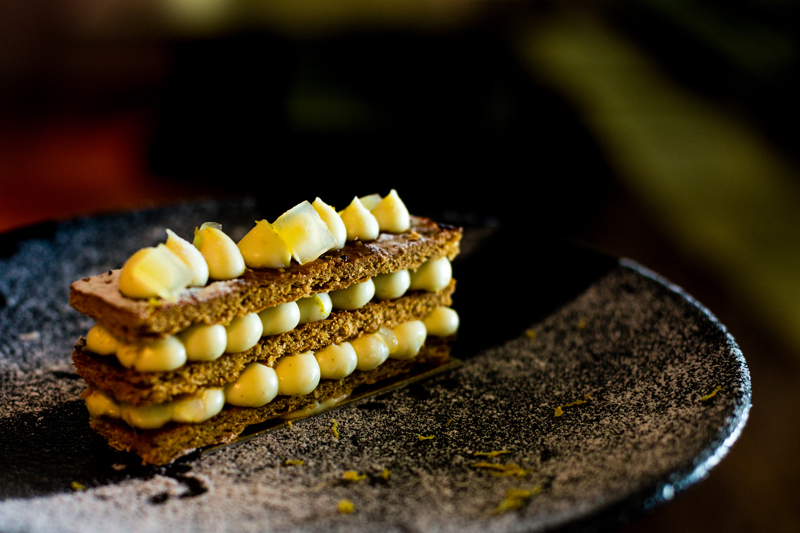 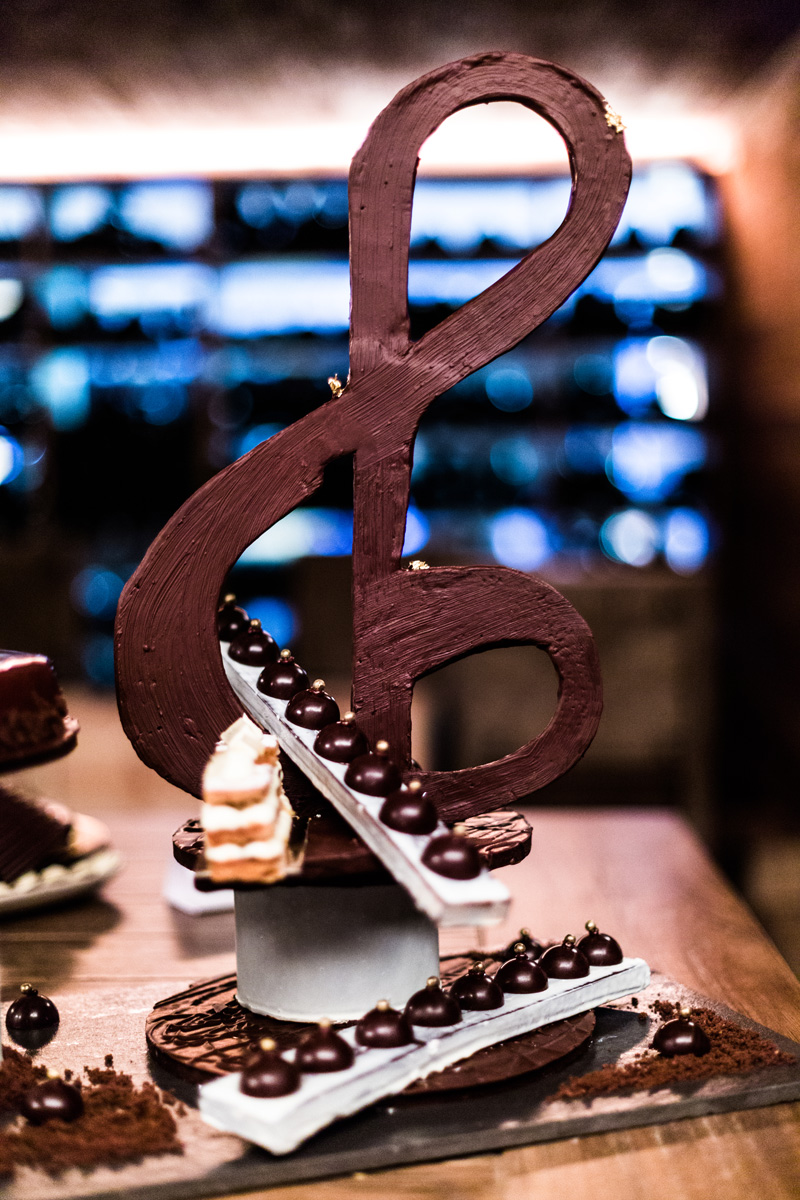 If you also want to discover dessert paradise in Mauritius, simply book a stay at the Constance Belle Mare Plage Hotel during the Festival Culinaire Bernard Loiseau which happens next year from the 16th – 24 March 2019. And in case you need even more convincing, here’s a sneak peek at what you can expect: